Warning: Use of undefined constant wp_cumulus_widget - assumed 'wp_cumulus_widget' (this will throw an Error in a future version of PHP) in /home/customer/www/whatifpost.com/public_html/wp-content/plugins/wp-cumulus/wp-cumulus.php on line 375
 Five things immigrants need to know about Obamacare
≡ Menu 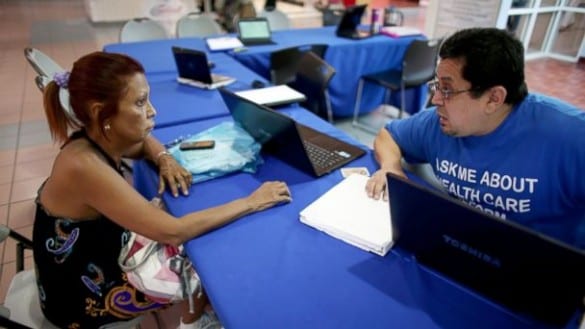 Signing up for coverage under Obamacare has been at least a little confusing for nearly everyone we’ve talked to. First-time insurance buyers don’t know what terms like “coinsurance” and “out-of-pocket costs” mean, freelancers are struggling with how to estimate their annual income, and hardly anyone who’s not an insurance company knows what actuarial values are.

But from what we’ve seen, no one will have a harder time navigating through Obamacare than the 40 million U.S. residents who were born in another country . Like most people, their eligibility for subsidies or Medicaid coverage depends on their income– but on top of that, immigration status, how long they’ve lived in the U.S., and in some cases, even their country of origin will all play a role.

To help make things a little easier, we’ve put together a quick guide to Obamacare for immigrants.

Under the Affordable Care Act, anyone who is considered “lawfully present” in the U.S. can buy coverage and is eligible for income-based subsidies on the Obamacare marketplaces. “Lawfully present” includes pretty much anyone who is living in the U.S. legally— naturalized citizens, green card holders, work and student visa holders, refugees, and asylum-seekers are all eligible.

In fact, so far the only immigrants we’re aware of who are here legally but aren’t eligible for coverage through the marketplaces are the DREAMers– undocumented immigrants who were brought to the U.S. as children (and who would be granted permanent legal residency if Congress passes the DREAM Act, which both parties support). The New York Times explains:

In June, the president announced that hundreds of thousands of illegal immigrants who came to the United States as children, attended school here and met other requirements would be allowed to remain in the country without fear of deportation.

Immigrants granted such relief would ordinarily meet the definition of “lawfully present” residents, making them eligible for government subsidies to buy private insurance, a central part of the new health care law. But the administration issued a rule in late August that specifically excluded the young immigrants from the definition of “lawfully present.”

2. Only those who have lived in the U.S. legally for at least five years are eligible for Medicaid (with some exceptions)

One major component of Obamacare was a provision expanding Medicaid to anyone making less than 138% of the federal poverty line (FPL). However, when Congress reformed welfare back in 1996, it barred most immigrants from receiving Medicaid until they’ve lived in the U.S. for at least five years. The Affordable Care Act doesn’t change the five-year rule, but it does provide some help to immigrants living below the poverty line: immigrants who have been in the country less than five years– and would otherwise qualify for Medicaid– are eligible for subsidies on the Obamacare marketplaces.

In many states, this will actually leave poorer immigrants with better access to affordable health coverage than their U.S. citizen counterparts. That’s because for U.S. citizens, Obamacare’s subsidies to help buy private coverage are only available for those making between 100% and 400% of the federal poverty line ($11,490 for a single adult)– every citizen making less than that was supposed to get Medicaid. Congress had no idea that the Supreme Court would make Medicaid expansion optional, leaving poor residents in many states without Medicaid coverage or access to subsidies.

Also, there are a few exceptions to Medicaid’s five-year rule:

3. Applying for Medicaid or CHIP under Obamacare won’t affect your immigration status

From healthcare.gov’s extremely helpful page with info for immigrant families:

Applying for Medicaid or CHIP, or getting help with health insurance costs in the Marketplace, does not make someone a “public charge.” It will not affect someone’s chances of becoming a Lawful Permanent Resident or U.S. citizen. The one exception is for people receiving long-term care in an institution at government expense. These people may face barriers getting a green card.

4. Undocumented immigrants can’t get any coverage through Obamacare

However, most undocumented workers will continue to rely on a patchwork of community clinics (or emergency rooms) for their healthcare.

5. Undocumented parents can apply for coverage for legal resident children without worrying about getting deported

Some undocumented immigrants have children who are legal residents and thus eligible for coverage under Obamacare even though their parents aren’t. However, immigrant advocates worried that undocumented parents would be leary of sharing information on the marketplace out of fear that it could lead to them being deported. And so in October, the Obama administration’s Immigration and Customs Enforcement published a memo explaining that information obtained through health care registration would not be used to pursue immigration cases against anyone in the country illegally.

For more info on applying for Obamacare coverage as a non-citizens, ThinkProgress has a useful guide here, and definitely check out “What do immigrant families need to know about Marketplace coverage” on healthcare.gov.

Previous post: An Obamacare guide for freelancers and the self-employed