Warning: Use of undefined constant wp_cumulus_widget - assumed 'wp_cumulus_widget' (this will throw an Error in a future version of PHP) in /home/customer/www/whatifpost.com/public_html/wp-content/plugins/wp-cumulus/wp-cumulus.php on line 375
 Fact checking the (very few) health care claims in the second debate
≡ Menu 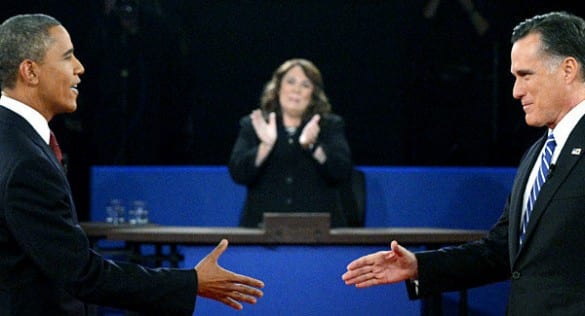 Last night’s spirited town hall debate was a great chance to see the clear differences between the two candidates on a bunch of important issues– the economy, the deficit, energy, jobs, and foreign policy– but not so much on health care. There wasn’t a single question on the subject this time around.

Still health policy did sneak into a couple of the candidates answers on other topics. Here’s a fact check of those claims.

OBAMA: “In my health care bill, I said insurance companies need to provide contraceptive coverage to everybody who is insured […] Gov. Romney not only opposed it  — he suggested that, in fact, employers should be able to make the decision as to whether or not a woman gets contraception through her insurance coverage.”

The Affordable Care Act does say that all plans, including employer-based plans, have to provide contraceptive coverage without a copay. There’s an exception for religion-affiliated institutions (churches, Catholic universities, etc.)– for these employers, contraceptive coverage will be paid for by the insurance company rather than taken from the employers’ premiums.

It’s also true that Romney opposes this new rule mandating plans contraceptives, and he doesn’t deny that. But his defense doesn’t make a ton of sense either. Since most people get health coverage through their jobs, without this rule, employers will once again be the ones deciding whether employees get contraceptive coverage (or states– some already mandate coverage).

ROMNEY: “There’s no question but that Obamacare has been an extraordinary deterrent to enterprises of all kinds hiring people.”

[This section may sound familiar– some of this is from our fact check of the last debate, when Romney made the same claim.] We looked into this claim a while back, along with PolitiFact and the Associated Press, and found no evidence to back it up. From the AP article:

What the CBO actually said is that the impact of the health care law on supply and demand for labor would be small. Most of it would come from people who no longer have to work, or can downshift to less demanding employment, because insurance will be available outside the job.

“The legislation, on net, will reduce the amount of labor used in the economy by a small amount– roughly half a percent– primarily by reducing the amount of labor that workers choose to supply,” budget office number crunchers said in a report from last year.

In the last debate, Romney cited a separate survey saying that Obamacare made 75% of small businesses less likely to hire. What Romney failed to mention is that (1) the survey was done by the Chamber of Commerce, which spent millions on ads and lobbying against the Affordable Care Act, and (2) it was an opt-in study, making the results more or less useless. For more, check out FactCheck.org’s analysis of that survey here.

ROMNEY: He said that by now middle-income families would have a reduction in their health insurance premiums by $2,500 a year. It’s gone up by 2,500 (dollars) a year. And if “Obamacare” is passed — or implemented — it’s already been passed. If it’s implemented fully, it’ll be another 2,500 (dollars) on top.

This one’s hard to check because we’re not sure exactly where Romney got that first number. It’s pretty close to the result of a Kaiser Family Foundation survey from last month; it did find total premiums for a family plan have increased $2,370 since 2009, although most of that was covered by employers– the employees’ share only increased $801. According to the Congressional Budget Office, Obamacare, when fully in place, should bring down premiums for employer-based coverage slightly, especially for small business.

Meanwhile, the claim that Obamacare will add $2,500 to the cost of premiums refers to the individual market, which is totally separate from the employer-based coverage Romney cites above. On top of that, as we mentioned in our fact check of the last debate, this $2,500 figure is pretty misleading. The entire increase in average premiums comes from people purchasing better coverage– not because coverage is getting more expensive. (It also ignores the subsidies, which will help bring down premiums dramatically for most families.)

ROMNEY: [President Obama] said he would have by now put forward a plan to reform Medicare and Social Security because he pointed out they’re on the road to bankruptcy.

The Affordable Care Act contains a ton of provisions to improve the quality of Medicare coverage, while bringing down the cost. So many, in fact, that we did an entire post about them, which you can read here.

Obama: “You know, there are some things where Gov. Romney is different from George Bush. George Bush didn’t propose turning Medicare into a voucher.”

Actually, as the Washington Post’s Ezra Klein points out, George W. Bush did propose a voucher system for Medicare in “Renewing America’s Purpose,” a book of policy proposals he put out in 2000. It’s not something he really pursued as president though.

Next post: No, Mitt Romney can’t pay for his defense spending increase by repealing Obamacare