Warning: Use of undefined constant wp_cumulus_widget - assumed 'wp_cumulus_widget' (this will throw an Error in a future version of PHP) in /home/customer/www/whatifpost.com/public_html/wp-content/plugins/wp-cumulus/wp-cumulus.php on line 375
 Everyone agrees Medicaid doesn’t pay doctors enough. What to do about it is another story
≡ Menu

Everyone agrees Medicaid doesn’t pay doctors enough. What to do about it is another story 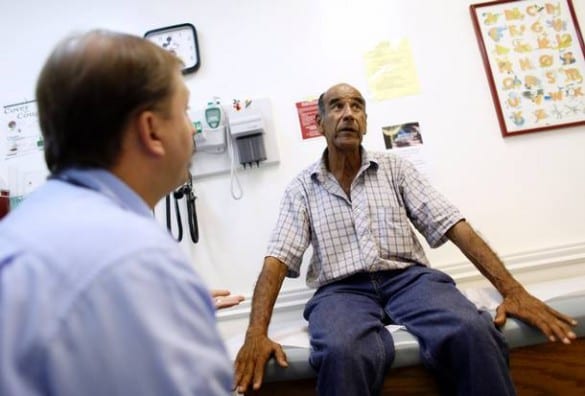 We’ve been talking a lot about the campaigns’ plans for Medicare lately, but as former president Bill Clinton reminded us at the Democratic National Convention, there’s a much bigger difference between Obama and Romney over Medicaid. We’ll look at Romney’s Medicaid plan in our next post, but first we wanted to finish our series on bogus arguments made by Medicaid critics.

“Expanding Medicaid too expensive for states,” was one. Turns out many states could actually save money thanks to the Medicaid expansion. “Medicaid is worse for you health than having no insurance,” was another. That one is just plain false. “Medicaid patients mostly use the emergency room for routine care.” Also wrong.

Here’s the latest line of attack: “Medicaid doesn’t pay doctors enough.” But the thing is on this one, strong supporters of the program actually… agree?

Conservative health care blogger Avik Roy explains why rates are so low and why this is a problem:

By and large, the Department of Health and Human Services blocks states from curtailing eligibility for Medicaid, and the 1965 Medicaid law prevents states from raising co-pays or deductibles for many services. So states are left with one option: paying less to doctors and hospitals […]

As a result, most doctors choose not to see Medicaid patients, because they can’t keep their practices alive if they do. That, in turn, makes it hard for Medicaid patients to get doctor’s appointments for annual checkups, routine care, and even urgent medical problems. A 2011 study published in the New England Journal of Medicine found that many doctors refuse to see Medicaid children complaining of seizures, uncontrolled asthma, and even broken arms. [In the study, 91 of 273 clinics surveyed would accept Medicaid children, but the average wait time was 22 days longer– and obviously depended on the condition.]

Jonathan Cohn, a liberal-leaning health care blogger at The New Republic agrees with Roy’s assessment of the problem:

To be clear […] Roy and the rest are absolutely correct when they suggest Medicaid has problems. For certain populations and particularly in certain states, it’s unambiguously inferior to private insurance and to Medicare. Partly that reflects structural problems in the program, like poor management of chronic disease. But partly (perhaps mostly) it reflects the fact that Medicaid reimburses the providers of medical care at absurdly low rates. This makes it harder for Medicaid patients to find professionals that will see them.

While both supporters and critics of Medicaid agree that low reimbursement rates are an issue that should be dealt with, they have vastly different ideas for what to do about it.

Supporters of Medicaid have a pretty straightforward solution, which Cohn explains:

The solution to this problem is to spend more money on the program, so that it reimburses physicians and hospitals at levels closer to other insurance programs. The Affordable Care Act actually does that, albeit modestly, by boosting Medicaid payments to primary care doctors and reducing the number of uninsured who will get pure charity care.

Republicans naturally hate the idea of more government spending, so they’ve proposed a different solution: block grants. Currently the federal government setting the rules for who Medicaid will cover and then paying part of what states end up spending. With block grants, states would be given the “flexibility” to set their own eligibility rules and get the federal share in a lump sum.

The problem is that if states get the same amount of money (or much less, which is what Paul Ryan and Republicans in Congress have proposed) and they choose to increase payments to doctors, then to make the numbers add up they’d have to cut people out of the program, stop covering certain conditions, or shift costs onto Medicaid beneficiaries– who, remember, are some of the poorest Americans.

In other words, as Cohn puts it, block grants solve one problem (low reimbursement rates for doctors) by creating another (gaps in coverage). Meanwhile, the real problem– overall access to care– goes unaddressed.

And that brings us to Ryan and Romney’s Medicaid proposal. Their plan actually makes access to care worse, by pairing block grants with massive cuts in Medicaid funding. It would save the government some money, but low income Americans would find it much, much harder to get needed care. We’ll have more on that in our next post.

Next post: Five reasons why ER’s don’t mean free healthcare for the uninsured