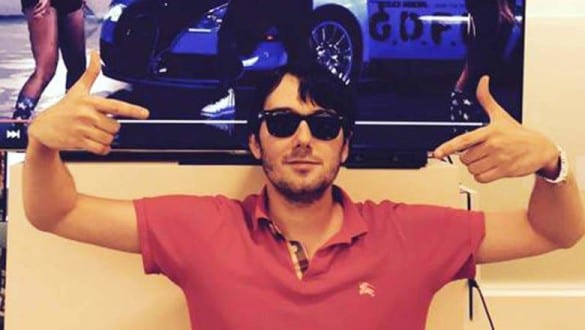 Surprisingly this guy, Martin Shkreli, is not a great person.

Hey, it’s been a while! Sorry for being MIA recently– we’ve been working on a big project for another, non-healthcare site. Luckily late summer is usually a slow time for health news, and this year was no exception. In what’s becoming an annual tradition, some journalists freaked out about proposed Obamacare rate hikes, but it’s still too early to say what rates regulators will approve in most states (they will almost certainly be lower). Some of the 2016 presidential candidates released health plans, but with the election over a year away, it’s too early to pay much attention (for example, Scott Walker, who put out one of the more detailed plans on the Republican side in August, has already dropped out).

There was one story that caught our attention though: a small startup jacked up acquired a drug used to treat life-threatening infections in AIDS patients, and jacked up the price by 5,000% overnight. It touches on the biggest problems with the prescription drug industry, and the outrage that ensued might even generate enough momentum to fix some of them.

“I can see how it looks greedy”

If you missed the story when it first broke, here are the details: In August, Turing Pharmaceuticals, a startup run by a 32-year-old former hedge fund manager, Martin Shkreli, purchased the rights to the drug Daraprim. Known generically as pyrimethamine, Daraprim is used to treat toxoplasmosis, a rare but potentially life-threatening infection that can cause brain, lung, and eye damage in infants and people with compromised immune systems, like AIDS and chemotherapy patients.

The drug, which is no longer under patent, has been on the market for 62 years and sold for $13.50 per tablet until it was purchased by Turing. The company immediately raised the price to $750 per tablet.

It became a huge story, in large part because Shkreli is a perfect villain. He’s the kind of guy who posts photos to Twitter showing how rich he is, and he seems to see nothing wrong with his apparent attempt to price gouge AIDS and cancer patients. He called one journalist who asked him to defend his decision a “moron” who doesn’t “think logically,” and told others, “I can see how it looks greedy, but I think there’s a lot of altruistic properties to it” and “at this price it’s a reasonable profit, not excessive at all.”

And this isn’t even the first time he’s jacked up the price of an existing drug: his first biotech company purchased the rights to Thiola, another older drug that’s used to treat a rare kidney disorder, and raised the price 2,000%, from $1.50 to $30. Derek Lowe, chemist and writer of the popular pharmaceutical blog In the Pipeline, called it “the most unconscionable price hike I have yet seen.”

The rest of the pharmaceutical industry has attempted to portray Shkreli as kind a rogue operator, but the truth is that Shkreli is far from the first pharmaceutical CEO to buy an old, generic drug and jack up the prices. As The New York Times reports:

Cycloserine, a drug used to treat dangerous multidrug-resistant tuberculosis, was just increased in price to $10,800 for 30 pills from $500 after its acquisition by Rodelis Therapeutics. Scott Spencer, general manager of Rodelis, said the company needed to invest to make sure the supply of the drug remained reliable. He said the company provided the drug free to certain needy patients.

In August, two members of Congress investigating generic drug price increases wrote to Valeant Pharmaceuticals after that company acquired two heart drugs, Isuprel and Nitropress, from Marathon Pharmaceuticals and promptly raised their prices by 525 percent and 212 percent respectively. Marathon had acquired the drugs from another company in 2013 and had quintupled their prices, according to the lawmakers, Senator Bernie Sanders […] and Representative Elijah E. Cummings, Democrat of Maryland. 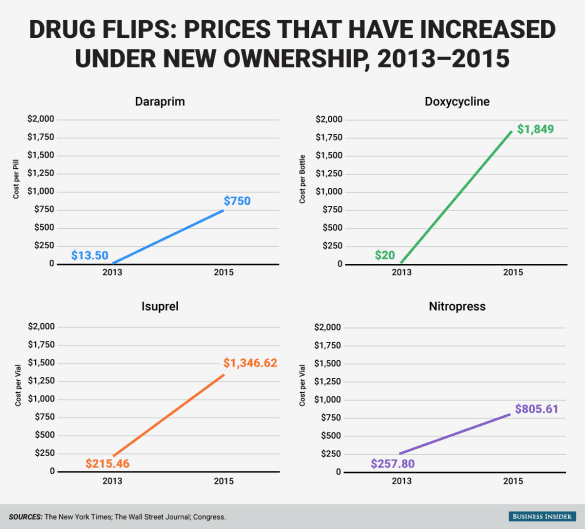 These price hikes have real consequences for ordinary patients. ABC News reported on one woman who says she’s spent $80,000, taken from her retirement account, since the price of her pain medication for endometriosis went from $0.50 to $37 per dose. Others have looked overseas, even though it’s illegal to import prescription drugs to the U.S., and some have simply stopped taking needed medications.

Wait, isn’t the whole point of generics is that they’re inexpensive?

The high cost of prescription drugs has long been a problem in U.S. healthcare. Unlike every other developed country, our government doesn’t have the authority to set drug prices or even to negotiate for lower prices in programs like Medicare. One of the few ways we have to keep drug prices under control is with generic alternatives– and it’s been very successful: the Generic Pharmaceutical Association estimates that generic drugs saved the U.S. healthcare system $1.2 trillion between 2003 and 2012.

Generics work to bring down prices by eliminating drug company monopolies. A company that patents a new drug typically has exclusive rights for the first 20 years, but after that it’s fair game for other companies to make generic versions. For drugs treating common conditions, this system works great. There’s a huge upfront cost to producing a generic drug– figuring out how to produce it, getting FDA approval (which involves buying a lot of samples of the brand name drug), and setting up production– but for a drug like, say, Lipitor, where there are millions of potential patients for a generic alternative, it’s worth the investment.

But for rarer diseases it might not be worth it for other companies to develop a generic line. For example, in the case of Daraprim, roughly 10,000 prescriptions are filled each year– a drop in the bucket for most drug companies. The new, higher price of Daraprim might entice some competitors to enter the market, but Turing can always drop the price as soon as it sees a challenger coming, as Vox’s Sarah Kliff explains:

Let’s say I decide to launch Sarah’s Generic Drug Company, and I’m pretty sure I can break even by slightly undercutting Turing and charging $700. What happens if Turing responds by dropping its price down to $500, or even back to $13.50? It will keep all its patients — and my nascent drug company is likely going bankrupt.

What this means is that for many rare diseases (or as they’re called in the industry, “orphan diseases”) is that generic manufacturers don’t have a legal monopoly, but they do have what economists call a natural monopoly.

Really the only thing that has kept other drug manufacturers from jacking up the prices of these drugs even more than they have is to avoid scrutiny from lawmakers. The attention that Shkreli’s scheme brought is exactly what they hoped to avoid.

So how do we rein in the price of generics for rare diseases?

First, we should point out that we’re looking just at generic drugs here. The high price of patented, brand name drugs is also a huge problem in the U.S., but that issue is a little different. The argument made by drug companies and their defenders is that they have to charge high prices for new drugs to pay for all of the other potential drugs they tested that didn’t work. A big potential payoff gives drug companies an incentive to innovate, and they say this is especially true for rare diseases, where there are fewer potential customers.

But even if you buy that argument, it doesn’t apply to generics. With generic drugs, the innovation has already happened and whoever developed the original drug already had 20 years of exclusive rights as a reward.

Shkreli tried to argue that raising the price of Daraprim would help his company develop a better version in the future, but Sam Peltzman, a health economist and professor at the University of Chicago tells Business Insider that argument is “total hokum”:

“The sources of research funding are the attraction of getting a return on the research-funding investment. They do not come from someone making a lot of money and saying, ‘I’ve got nothing else better to do with it, so I better do some research.’ The economics is backwards in a statement like that.”

Eventually Shkreli backed down, saying that Turing would raise the price, but by a smaller amount, yet to be determined. Still though, relying on Twitter to shame drug companies into backing off of price increases isn’t a solid plan. Here are some better potential solutions.

Price transparency: As ABC News points out, there are sometimes legitimate reasons for generic price increases:

Profit is no doubt a driving force in the recent price spike of generics. But experts say prices can also rise for other reasons, including raw material shortages, manufacturing disruptions because of factory closings or violations, or companies leaving the market or merging with competitors. All of those factors reduce supply and competition.

Right now though we have no idea what’s behind drug company price increases. Proposed bills in a handful of states would require drug companies to at least be disclose development costs, manufacturing and marketing costs, and how much profit their high cost drugs generate. This scrutiny alone could help keep prices low since there’s evidence that even the consideration of price controls reduces drug prices, but it also lays the groundwork for future regulation.

Price controls: Some economists have suggested treating generic drugs similar to how we treat another natural monopoly: utility companies.

Electric companies open their books to regulators, allowing states to set limits on how much utilities can charge for power. Their goal is to ensure that companies can make some profit but aren’t gouging customers. There’s no reason why the federal government couldn’t do the same for generic drugs.

Allow importation from other countries: The natural monopoly Shkreli has on Daraprim only exists in the United States. Plenty of other companies manufacture it abroad under its generic name, pyrimethamine, they just don’t sell it in the United States because getting FDA approval is expensive and time-consuming.

We definitely don’t want unregulated drugs coming into the United States– as Newsweek recently reported, developing countries that lack effective regulating agencies like the FDA are seeing an explosion in fake drugs. However European and Canadian drug makers do face strong regulation in their home countries. As Mother Jones’ Kevin Drum asks:

Why not give them reciprocity? If a generic drug is approved in Europe, go ahead and provide streamlined approval in the US. Why not trust European drug regulators?

Drum points out that in the case of Daraprim, the Swiss drug company Roche already has approval to sell a different drug in the U.S. used to treat malaria that contains pyrimethamine. If the FDA could streamline approval to make the same tablet but without the other chemical used to treat malaria, the cost would be incredibly low (Roche sells its anti-malaria drug for a couple of dollars per pill at most).

Create an agency to produce generic drugs: Besides price gouging, another worry when companies have a natural monopoly on a drug to treat a rare disease is that the company would simply stop making it. A government sponsored non-profit producing certain generic drugs would not only guarantee low prices, but also guarantee access for patients who rely on them.

[By the way, if you’re interested in ways to get the price of non-generic drugs under control, Ezekiel Emmanuel makes some good suggestions in the this New York Times op-ed.]

Next post: Obamacare open enrollment has begun– here’s our guide to getting covered (updated for 2016)!

Previous post: Can healthcare be cured of racial bias?