Warning: Use of undefined constant wp_cumulus_widget - assumed 'wp_cumulus_widget' (this will throw an Error in a future version of PHP) in /home/customer/www/whatifpost.com/public_html/wp-content/plugins/wp-cumulus/wp-cumulus.php on line 375
 Do we really have to worry about a doctor shortage?
≡ Menu

Do we really have to worry about a doctor shortage? 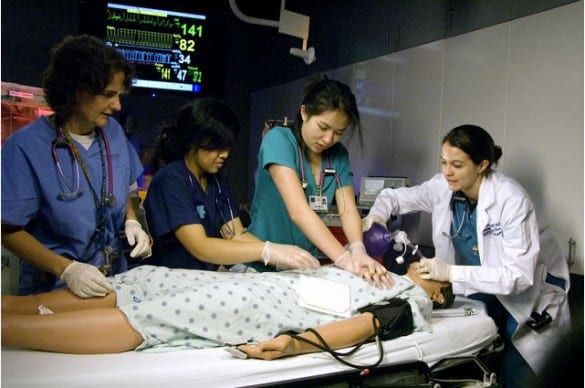 One of the more reasonable criticisms of the Affordable Care Act (ACA) goes something like this: “It’s great that everyone will have coverage, but there aren’t enough doctors to go around.”

The ACA addresses the problem somewhat by funding loan forgiveness for physicians who practice in underserved areas and by increasing Medicaid and Medicare payments to primary care doctors (for the next few years anyways). Even so, organizations like the Association of American Medical Colleges (AAMC) and the American Academy of Family Physicians predict that between Obamacare and aging baby boomers we’ll be short over 40,000 doctors by the end of the decade.

The thing about those predictions though, according to a new paper in Health Affairs by Linda Green, a mathematician who has been studying the U.S. health care system for twenty years… they may not be true.

Most forecasts of doctor shortages assume that a primary care physician can handle a set amount of patients in a practice, usually about 2,500. And if that remains the case, Green agrees there would indeed be too few doctors to meet the nation’s medical needs.

However, Green doesn’t think the status quo is here to stay: She argues that the health care system is rapidly changing. First, doctors are increasingly joining up into big practices. They’re able to share support staff and office space, which can make it easier to take on a bigger patient population. She refers to this as “physician pooling.”

Second, the health care workforce is changing, as physician assistants and nurse practitioners take on larger roles. Having non-physicians take care of routine care, things like strep throats and ear infections, can again increase the size of a doctor’s patient population […]

Even organizations that predict large doctor shortages admit that the health care system is changing, but they disagree on how quickly it’s happening. Dr. Atul Grover of the AAMC  told Kliff, “There are so many scope of practice issues and so many reimbursement issues that can slow this.” (We should point out that AAMC is a lobbying group for medical colleges. Doesn’t mean they’re wrong necessarily, but they do have a financial interest in training more doctors.)

Still, according to Green’s study, not all that much has to change. By working in practices of two or three doctors, shifting as little as 20% of patients to a nurse or physician’s assistant, and using electronic health records, “most if not all of the projected primary care physician shortage could be eliminated.” Given recent trends (for example, the number of physicians practicing in “patient-centered medical homes” — which makes more use of nonphysician providers than a traditional practice — has increased 35-fold in just three years), she writes says this scenario is “entirely plausible, if not conservative.”