Despite Obamacare promise, transgender people have trouble getting some care 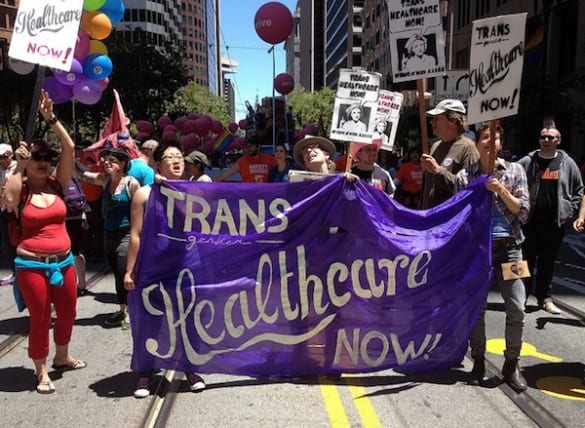 Since the transition of celebrity Caitlyn Jenner, and the popularity of shows like Orange is the New Black and Transparent, transgender people have been much more visible lately. With this new spotlight, we realized that while we’ve covered how the Affordable Care Act affects many other groups who have traditionally had trouble accessing care (for example, women, immigrants, and gay couples before the Supreme Court decision), we’ve never looked at how it affects transgender Americans.

Partly that’s because under the Affordable Care Act, things should be pretty straightforward. Insurers can no longer deny coverage based on gender or pre-existing conditions, and back in May the White House released further guidance clarifying that insurers cannot deny coverage of sex-specific preventive services to transgender people. Yet as a report from the nonprofit news service Kaiser Health News shows, insurance company rules are still preventing some from accessing those services.

Transgender people are still fighting for access to crucial health services despite the Affordable Care Act’s requirement that insurance companies not deny coverage based on gender or health history.

The issue stems from the fact that enrollees must check a single gender box when they sign up for a plan sold on the individual or small group markets, according to advocates and health care providers.

“What happens is that the health insurance companies have specific codes and they put you in as female or male; you only get services that go with that code,” said Robin Maril, senior legislative counsel at the Human Rights Campaign, an advocacy group for lesbian, bisexual, gay and transgender people.

But someone who is transitioning from a woman to a man or vice versa might still have organs associated with the other gender, such as a uterus and breast tissue for someone born as a woman, or a prostate for someone born as a man. In addition, the transitioning process can take years, and some transgender people forego reassignment surgery because of cost or other reasons.

“The idea that you have insurance and you’re still being denied basic care is outrageous,” Maril said. She noted that before the health law, many insurance companies had exclusions barring transition-related care or care to transgender people in general, citing it as a “pre-existing condition.”

Under the federal health law, insurance companies selling policies in the individual or small group markets cannot deny coverage to transgender people or to those who are in the process of transitioning their sex. In addition, the administration released guidance in May telling insurers that they cannot deny coverage of sex-specific preventive services to transgender people. But advocates say that has not always happened in practice.

America’s Health Insurance Plans, a trade group, said that plans are complying with the law.

“Health plans want to make sure patients have access to the care they need, and this latest guidance was aligned with those efforts. Plans do cover medically necessary care and preventive services for transgender individuals,” said Clare Krusing, of  AHIP.

The challenges with insurers lead some transgender people to forego an insurance plan altogether or to stick to their birth gender on their insurance ID cards.

Eli Strong started transitioning from female to male before passage of the Affordable Care Act, while he lived in Washington, D.C. and had employer-based coverage. In 2008, he changed all his legal identification to male, but kept his health insurance ID as female, because he had not yet gotten a hysterectomy. He didn’t want to have to fight his insurer over a gynecological exam.

“I was afraid that my insurance company wouldn’t cover annual exams, or anything having to do with organs that insurance companies deemed as non-male,” Strong said. “I resented having to keep my insurance marker as female because the way I saw it, that simple marker shouldn’t determine what coverage I received. What should determine my coverage is whatever organs I currently have, or conditions I am diagnosed with.”

Strong finally changed his insurance ID to male in 2014 after having a hysterectomy. But some of his transgender friends have not had as easy a time navigating the system. Others, he said, changed their insurance IDs to their new gender and contacted their insurance companies after a claim was denied to explain their transgender status, with limited success.

Insurance difficulties can create additional anxiety for people already fearful about seeking health care. Strong said that before his hysterectomy, “I put off having annual [gynecological] exams … because it was also so incredibly uncomfortable to be a bearded man in a gynecologist’s office.”

“Most transgender men still have a cervix, so they need a pap smear, so you have to create an environment where they feel comfortable talking about themselves,” said Harvey Makadon, director of professional education and training at Fenway Community Health, a LGBT health center in Boston.

Meanwhile, the insurance industry argues the responsibility for clarifying health service needs should fall to the health care provider, arguing that the doctor can explain the patient is transgender in the notes section of a submitted claim.

But that doesn’t always work, says Dru Levasseur of the Transgender Rights Project at Lambda Legal. Most insurance billing systems are automated and reproductive services like mammograms and prostate exams are flagged with a corresponding “female” or “male.”

Levasseur says the service is denied automatically if the gender and service don’t match. To allow payment, he and others say, an insurer could put a hold on the claim, verify it with the health care provider and then manually override the code. “The onus should be on the insurance companies,” Levasseur said.

Medicare already has codes that allow providers to identify the person getting, say, a pap smear or a mammogram, as transgender, which allows the claim to be processed, according to the AAPC, a trade group representing physician-based medical coders. Transgender advocates and the AAPC say the same can be done with private insurers.

But the gendered service claims system is there for a reason and changing it is not as easy as flipping a switch, said Andrew Naugle, a consultant at actuarial firm Milliman. The system, he explained, is part of quality control mechanisms meant to filter out treatments that shouldn’t happen, like a child being prescribed a drug not deemed safe for that age group.

Though there’s no reliable data quantifying the relationship between the coding issues and denials, Sarah MacCarthy, a RAND Corporation health researcher said, “there’s a lot of anecdotal evidence that it’s challenging to access services, and if even if they are accessed, they continue to be of low quality.” Some plans and providers say they are committed to changing that.

Deborah Espinal, executive director of health plan policy at Kaiser Permanente, said her organization is intent on removing barriers to care. “We see many patients in transition that have a need for preventive services that cross genders, and we work to ensure that KP is both socially and medically sensitive to our transgender members before, during and after their transition,” Espinal said.

Advocates say their goal is to add new categories, such as ”transgender man,” or “transgender woman,” into insurance application forms, as well as into research, to get a more accurate picture of the number of transgender people, how many are denied coverage and how these denials affect health outcomes.

Next post: The 7 biggest problems with our healthcare system that Obamacare didn’t fix (and ideas for how it still might)

Previous post: The biggest insurers in the U.S. are merging- and in *some* places that could be a good thing