Warning: Use of undefined constant wp_cumulus_widget - assumed 'wp_cumulus_widget' (this will throw an Error in a future version of PHP) in /home/customer/www/whatifpost.com/public_html/wp-content/plugins/wp-cumulus/wp-cumulus.php on line 375
 Could Mitt Romney really repeal Obamacare?
≡ Menu 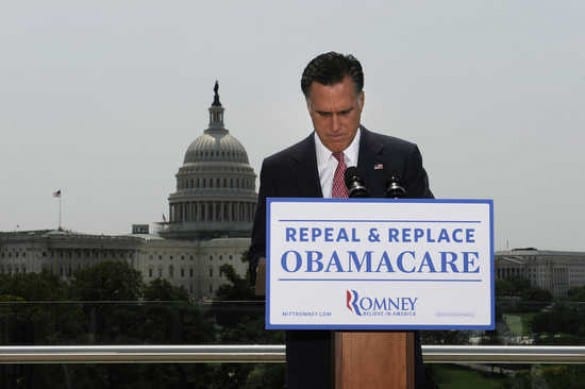 Mitt Romney’s taken some heat for his shifting positions over the course of the campaign (last week President Obama described it as “Romnesia”), but one thing he’s been consistent about is his promise to repeal Obamacare if elected. From Romney’s website:

On his first day in office, Mitt Romney will issue an executive order that paves the way for the federal government to issue Obamacare waivers to all fifty states. He will then work with Congress to repeal the full legislation as quickly as possible.

You might remember though that passing health reform was a big lift– Democrats controlled both houses of Congress and held a 60 vote super-majority in the Senate, and even then it just barely passed. Could Romney really repeal the bill even if Republicans control Congress, much less with just an executive order? The answer is… it depends.

The first part of Romney’s plan to repeal the Affordable Care Act– waivers for all 50 states– is an empty promise. Health law professor Timothy Jost, who knows more about the gritty details of the legislation than probably anyone, explains:

There are no “Obamacare waivers” that could be issued by executive order.  Section 1332 of the ACA permits “waivers for state innovation,” but these waivers, which only affect certain provisions of the law and can only be granted if specific substantive and procedural requirements are met, cannot be granted prior to January 1, 2017.  Even in 2017, a state seeking a waiver would have to show that it had a plan to provide coverage that is at least as comprehensive and affordable and that covers at least as many people as the ACA (without increasing the deficit), not exactly what Governor Romney has in mind.

With a Republican majority in the Senate

There’s is almost no chance that Republicans will get a super-majority in the Senate, but they might get a simple majority, and they’ll almost certainly keep control of the House. It’s a little unclear how much Republicans could do in this scenario though.

In the Senate there is a process called “reconciliation” that allows certain budgetary items to pass with just 51 votes (you might recall that Democrats used this same procedure to pass parts of the Affordable Care Act after the election of Scott Brown in Massachusetts broke their super-majority). However, there are rules: reconciliation can only be used to pass laws measures that (1) have an impact on the federal budget and (2) don’t add to the federal deficit.

As we pointed out in our last post, repealing the entire Affordable Care Act would add to the deficit. Besides that, many key parts of the law don’t have an effect on the federal deficit, like the ban on pre-existing conditions.

Republicans could use reconciliation to repeal just the parts of the law that spend money– the expansion of Medicaid and the subsidies to help people buy insurance fall under this category– but the rest of the law, including the individual mandate (which brings in money) would be left standing. This would set up an interesting showdown in the Senate.

Some very smart pundits argue that Republicans would never use reconciliation to partially repeal Obamacare, because the political downside is too great. For example, Ryan Lizza writes in the New Yorker:

Repealing the exchanges and subsides without repealing the mandate and the other regulations and cost controls in the law would create a health-care Frankenstein that a President Romney would be rather nuts to support.

Other smart pundits think that if Republicans repeal part of Obamacare using reconciliation, it would force Democrats to help repeal the rest of the law using normal Senate procedure. The Washington Post’s Ezra Klein writes:

Are Democrats really going to stand together on the floor of the United States Senate and filibuster in order to keep the individual mandate in place, which will now be forcing people to buy insurance they can’t afford without the subsidies that made the whole thing work? They’d have to be suicidal to do that.

Either way it would be a long messy fight.

Without Republican control of the Senate

Right now it’s looking like Democrats will retain a slim majority in the Senate. As of this writing, the New York Times election blog Five Thirty Eight has Democrats at an 87.6% chance of keeping their majority and predicts they’ll end up with around 52 or 53 Senate seats.

If Democrats have a majority in the Senate, reconciliation isn’t an option for Republicans (unless some red state Democratic Senators up for re-election in 2014 are tempted to join them in the repeal fight). Still there are some things Romney could do to severely hinder the new law without help from Congress.

The website Politico made a list of five ways Romney could attempt to “kill” health reform without repealing it. For example, breaking the federal exchanges:

Under the law, the federal government is supposed to build health insurance exchanges for states that don’t create their own. But with Romney’s help, those states could defeat that effort, too, even if the law remains unchanged.

A quirk in the language of the law — which the law’s supporters call a “drafting error” — could allow Romney to make it basically impossible for federally run exchanges to function. That’s because the law doesn’t explicitly give federal exchanges the ability to provide the same insurance subsidies that it will give to state-run exchanges.

Obama’s Internal Revenue Service issued rules intended to eliminate this problem, but Romney’s IRS could reverse that interpretation of the law.

Another option for Romney– simply doing nothing:

He could stop the writing of the remaining rules to implement the law, stop Medicare from moving ahead with programs to find new ways to pay providers, stop the IRS from enforcing the individual mandate and even stop Medicaid officials from facilitating the expansion of the program in the states that want it.

This would land the Romney administration in court, of course […] But the process of forcing the president to implement a law through the courts is a long one, especially if it requires separate lawsuits to enforce different pieces of the law. If public opposition to the Affordable Care Act remains strong, Romney may pay little price from choosing to fight these cases.

In this scenario, the Affordable Care Act is safe. The Supreme Court has already declared it constitutional (there are a few other legal challenges, but they won’t affect whether the entire law stands or not) and President Obama would surely veto any attempt by Congress to repeal it.

All of this is to say that the 2012 election is key to the future of health reform. It represents the last chance Republicans have to repeal it, and the last chance Democrats have to make sure it remains intact. Whatever your position on the issue, that should be a big reason to vote on November 6.

Next post: What’s at stake for healthcare this election