Warning: Use of undefined constant wp_cumulus_widget - assumed 'wp_cumulus_widget' (this will throw an Error in a future version of PHP) in /home/customer/www/whatifpost.com/public_html/wp-content/plugins/wp-cumulus/wp-cumulus.php on line 375
 Coming soon: free birth control for women
≡ Menu 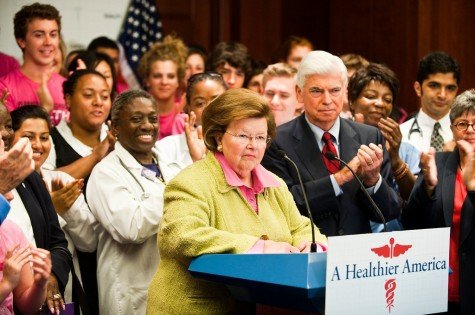 Back in December 2009, Senator Barbara Mikulski (D- Maryland) introduced an amendment to the Affordable Care Act expanding coverage of women’s health care, by allowing the government to require insurers to cover preventive care and screenings for women at little or not cost. A recent article from the Associated Press explains:

President Barack Obama’s health care law already requires most health plans to provide standard preventive care for people of both sexes at no additional charge to patients. Women’s health recommendations were considered new and politically sensitive territory, so the nonpartisan Institute of Medicine (IOM) was asked to examine the issue.

This week the IOM released its report. It recommends eight preventive services that should be required with no cost-sharing to women in health insurance plans, including:

But the part of the report that has received the most attention is the recommendation that insurance companies be required to provide birth control without copayments. Again from the AP:

Birth control use is virtually universal in the United States. Generic versions of the pill are available for as little as $9 a month. Still, about half of all pregnancies are unplanned. Many are among women using some form of contraception, and forgetting to take the pill a major reason. Experts say a shift to longer acting birth control would help.

Contraception is about more than simply preventing pregnancy — it can help make a woman’s next pregnancy healthier by spacing births far enough apart, generally 18 months to two years. Research links closely spaced births to a risk of such problems as prematurity, low birth weight, even autism. Research has shown that even modest copays for medical care can discourage use.

Already the panel’s recommendations have turned into a fight over abortion. The conservative group Family Research Council complained that under the recommendations Plan B, otherwise known as the “morning after pill,” would be covered. FRC and other anti-abortion groups consider the morning after pill a type of abortion. However, as Mother Jones’ Kate Sheppard points out:

Medical organizations like the National Institutes of Health and the American College of Obstetricians and Gynecologists have been clear that this is factually incorrect; pregnancy does not begin until a fertilized egg is implanted.

By the way, shouldn’t even anti-abortion groups be in favor of expanding access to drugs to prevent unintended pregnancies? In any event, HHS has the final say on this, but it’s extremely likely that they will adopt the Institute’s recommendations. Director Kathleen Sebelius has called them “historic” and promised a quick decision, possibly as soon as next week.