Warning: Use of undefined constant wp_cumulus_widget - assumed 'wp_cumulus_widget' (this will throw an Error in a future version of PHP) in /home/customer/www/whatifpost.com/public_html/wp-content/plugins/wp-cumulus/wp-cumulus.php on line 375
 Latest updates on the Medicaid expansion
≡ Menu

Latest updates on the Medicaid expansion 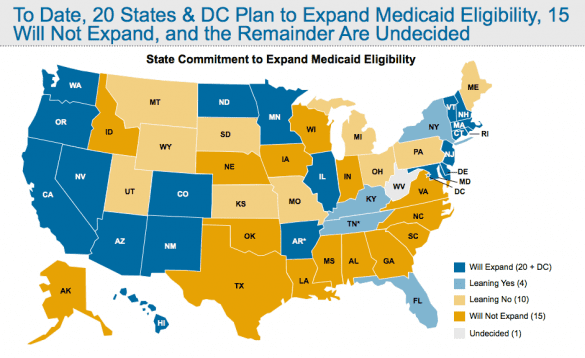 Where states currently stand on the Medicaid expansion. This will almost certainly change.

With time running out in the legislative sessions for many states, we figured now would be a good time to check in on the status of the Medicaid expansion around the country, and we’ve noticed some trends. Ever since the federal government told Arkansas it would consider letting them use federal funds to purchase private insurance for poor residents instead of Medicaid, many Republican-controlled states are giving expansion a second look. However, even proposals based on the Arkansas model are in danger of getting derailed by ultra-conservative state Houses… and the clock is ticking.

In Montana, Governor Steve Bullock and other Democrats were pushing for a plan similar to Arkansas, using the Medicaid expansion money to purchase private insurance for poor residents. It was a nail-biter in Montana’s narrowly divided House, and the expansion ultimately failed by one vote when a Democratic legislator accidentally pushed the wrong button, voting against it. Montana’s House rules do allow legislators to change votes, but not when “it would affect the outcome of legislation” like it would here. When the mistake was discovered there was a re-vote, but by then four Republicans had flipped, and voted against the bill.

If that’s not frustrating enough, Montana’s legislative session ended a few days later, and doesn’t meet again for another two years, Unless there’s a special session to deal with the expansion (and Democratic governor Steve Bullock hinted that he might call one), the state government can’t even consider the issue again until 2015.

Previously, Pennsylvania Governor Tom Corbett has said he wouldn’t recommend expansion because the state needed “flexibility” and not a “one size fits all mandate” from Washington. He also cited unanswered questions about the rules of the new program. However, after a meeting with Health and Human Services Secretary Kathleen Sebelius earlier this month, the governor might be changing his mind.

Beverly Mackareth, the acting secretary of the Pennsylvania Department of Public Welfare, described the meeting as “phenomenal.” Corbett wants to make changes to the existing Medicaid program (although, as we noted before, he’s been vague about what those changes would be), and says Mackareth:

“They were very, very open to that. The people at (the Centers for Medicare and Medicaid Sevices) said we’ll work with you.”

According to Harrisburg’s Patriot News, one possibility the governor might pursue would be using the federal expansion dollars to purchase private coverage, again similar to what Arkansas has proposed.

Texas has the highest rate of uninsurance in the country– 6.2 million Texans lack coverage– but it was still assumed the Medicaid expansion was dead-on-arrival in the state. Rick Perry was one of the first governors to reject the expansion, and the Texas legislature has a reputation for being very, very conservative. However, last week the Texas House Appropriations Committee voted to send a blueprint for the Medicaid expansion to the floor of the House for debate.

This “Texas Solution” as the bill’s Republican author, John Zerwas calls it, has three parts:

The federal government is unlikely to approve a block grant (since it would likely scale back existing Medicaid coverage), but as Arkansas has shown, the feds are ok with using Medicaid dollars to buy private insurance. There’s sure to be a fierce debate, but if the expansion passes, up to 1 million Texans could gain coverage.

Florida: time runs out on expansion

Florida governor Rick Scott surprised nearly everyone when he came out in favor of Medicaid expansion for at least the first three years, when the federal government is paying for all of it. However, Florida’s Senate and House rejected Scott’s proposal, and instead each passed their own plan. Kaiser Health News and USA Today describe the Senate version, modeled on Arkansas:

Senate Republican leaders thought they had found a middle ground in early April when they devised a plan to use the Medicaid funding to enroll 1 million people into private coverage. Under that scenario, Republicans could argue they weren’t expanding Medicaid but using the money to expand residents’ choice of private plans.

Meanwhile, Florida’s House rejected the Senate’s version, and instead passed an even more conservative plan:

House members approved their own alternative Friday which takes no federal money. Instead, it would use about $3 billion in state funds over 10 years to provide $2,000 a year to the disabled and poor adults with children to buy health insurance. Enrollees would pay $25 monthly premiums, and able-bodied adults would have to work at least 20 hours a week.

That plan would extend coverage to 115,000 people, compared to the Senate plan’s 1 million people. Democrats and hospital officials say the plan would give people substandard coverage that is nonetheless unaffordable. And adults without children would get no help.

In any event, time has run out to draft a compromise bill between the House and Senate versions– the legislative session ends tomorrow. Similar to Montana, Democrats and other supporters of the expansion (and the $1 billion expansion would send to Florida next year) have asked Governor Scott to call a special session of the legislature. No word yet on whether he will.

Like Florida, Iowa’s House and Senate have also passed two different bills for expanding health coverage to the poor. The Senate bill would simply opt into the federal Medicaid expansion– adding an estimated 110,000 to 180,000 residents to the state’s Medicaid rolls.

The House bill opts out of the federal Medicaid expansion, and instead approves Republican Governor Terry Branstad’s plan to expand a limited benefits program for low income adults called IowaCare. Branstad’s plan would provide skimpier coverage to fewer people at greater cost to the state (his office puts the price tag at $162 million)– it seems the main draw is that it allows Republicans to say they rejected a piece of Obamacare.

A conference committee now has to work out a compromise between the two bills.

Arkansas: expansion passes, still not out of the woods though

And finally there’s Arkansas, who started the trend towards using Medicaid dollars to pay for private insurance. After initially failing to get through the House and despite the fact that it required a 75% majority in both houses, the state legislature voted yes on expansion. However, the Center for Medicare and Medicaid Services (CMS), still has to approve the plan, and as the website Project Millennial notes, “if CMS doesn’t accept Arkansas’s plan as is, the deal falls apart, courtesy of a severance clause.”

For more on the Arkansas “private option,” Kaiser Health News has a great, short Q&A with everything you need to know here.

Next post: What to make of the Oregon Medicaid study

Previous post: Some big employers are trying to avoid providing health benefits under Obamacare- can they get away with it?