Warning: Use of undefined constant wp_cumulus_widget - assumed 'wp_cumulus_widget' (this will throw an Error in a future version of PHP) in /home/customer/www/whatifpost.com/public_html/wp-content/plugins/wp-cumulus/wp-cumulus.php on line 375
 Privatizing the Medicaid expansion: Florida and Arkansas
≡ Menu 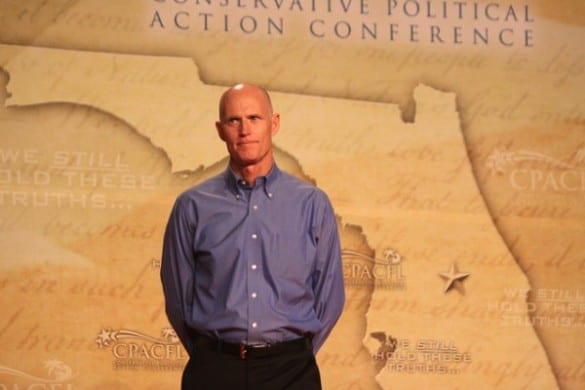 It’s budget-writing season in state capitals, and with Obamacare set to take full effect in 2014, state lawmakers have finally started to announce whether or not they will expand Medicaid (remember, the Supreme Court decision last June made it optional for states). In our next few posts, we’ll be taking a look at some of the most interesting developments at the state level. First up: Florida and Arkansas.

According to the U.S. Census, over 25% of Floridians are uninsured (the only state with a higher percentage of uninsured residents is Texas). Still, Florida governor Rick Scott’s announcement that he will support the Medicaid expansion was a huge surprise. New York Magazine’s Jonathan Chait explains why:

From the moment he appeared on the national stage, Scott seemed to be engineered to fight health-care reform. The wealthy owner of a vast hospital chain that paid massive fines for overbilling Medicare during his tenure, Scott bankrolled an anti-reform lobby, then ran and won in 2010 on a platform of obsessive opposition to Obamacare. He has steadfastly vowed to turn down federal subsidies to cover his state’s uninsured, and even concocted phony accounting assumptions to justify his stance. Rick Scott really hates health-care reform.

But Scott is a vulnerable incumbent in a swing state. And his refusal to accept Medicaid expansions would have left his state’s hospitals on the hook for $2.8 billion when uninsured Floridians show up in emergency rooms, prompting them to lobby Scott to change his mind. And so he has.

One thing that helped change Scott’s mind: a waiver allowing Florida to privatize its Medicaid program; almost all Medicaid enrollees in Florida will be moved into managed-care plans run by for-profit companies. But as the Tampa Bay Times reports, these plans don’t have a great track record:

The privatization expands on a five-county pilot program that has been rife with problems. Critics worry for-profit providers are scrimping on patient care and denying medical services to increase profits. Some doctors have dropped out of the pilot program, complaining of red tape and that the insurers deny the tests and medicine they prescribe. Patients have complained they struggled to get doctor’s appointments.

Several health plans also dropped out of the pilot program, saying they couldn’t make enough money. Patients complained they were bounced from plan to plan with lapses in care. Nearly half of the 200,000 patients enrolled in the pilot have been dropped from at least one plan, federal health officials noted at one point during negotiations.

Lawmakers say they have fixed the pilot program’s shortcomings, with provisions including increased oversight and more stringent penalties, including fining providers up to $500,000 if they drop out. The measures also increase doctors’ reimbursement rates and limit malpractice lawsuits for Medicaid patients in hopes of increasing doctor participation in the program.

Meanwhile, it’s unlikely that Scott’s managed-care scheme will save the state money. A study by the National Bureau of Economic research found that “[S]hifting Medicaid recipients from fee-for-service into [Medicaid managed care] did not reduce Medicaid spending in the typical state.” It did work in some states, but only those where Medicaid payments to providers had been relatively high (managed care plans save money by negotiating for lower rates, and generally not by getting enrollees to use fewer services). The Incidental Economist’s Austin Frakt found that Medicaid reimbursement rates in Florida are already pretty low, and in any event, the plans won’t be negotiating anyways– they’ll pay doctors and hospitals at rates set by the state.

Scott is also calling for the Medicaid expansion to last only three years– the period of time that the federal government will cover 100% of the costs of new Medicaid enrollees– requiring a new vote to reauthorize the expansion in 2017.

Still, even if Florida’s privatized Medicaid expansion is less efficient, more costly, and only temporary, at least hundreds of thousands of low income Floridians will get coverage… if it happens. On Monday, after Scott made his announcement, a state House committee voted against the expansion in a party-line vote, with ten Republicans voting no and five Democrats voting to expand the program.

The expansion isn’t dead yet– the Florida Senate, which is less conservative still has to vote– but right now its passage is far from certain.

It was a little less surprising that Arkansas’ Democratic governor Mike Beebe announced he too supports expanding Medicaid. Normally it would be dead on arrival in the Arkansas legislature though– not only do Republicans control both the House and Senate, any new spending needs a three-fourths majority to pass. Knowing it would be an uphill battle, Beebe got the federal department of Health and Human Services (HHS) to sign off on a deal to privatize the program, but, as the website Project Millennial explains, in a way that’s completely different from Florida:

Florida received a waiver from HHS allowing them to move Medicaid recipients into Medicaid plans run by private insurers—key redundancy being that they’re still Medicaid plans. Arkansas, by contrast, will be putting newly-eligible citizens directly into the insurance exchange where they can shop among private plans. The federal government said they’ll pick up the tab at the same rates—100% for the first three years, phased down to 90% by 2020—designed to support “traditional” Medicaid expansions in other states.

Now, a couple points about Arkansas using Medicaid money to purchase private plans on the exchanges. For one, it will be much more expensive. The Congressional Budget Office estimates that private insurance costs, on average, $3000 more per person. Multiply that times the 233,000 Arkansans expected to gain coverage and that’s almost $700 million per year in higher spending. Second, with the federal government on the hook for 100% of the costs of Medicaid expansion for the next three years, and 90% of costs after that, we’re all picking up the tab.

It’s also much more expensive for Arkansas in the long run. That may be why Arkansas, like Florida, will require the legislature to re-approve the deal in three years, when the state has to start chipping in part of the cost.

It should be noted that Beebe has said he’d be fine with expanding Arkansas’ traditional Medicaid program, but went this route because some Republican legislators have “philosophical objections” to covering people through a government program. However, the good news is that even though it’s a ridiculously expensive way to expand coverage, the Arkansas Times is reporting that the Republican House speaker and Senate President Pro Tem in Arkansas like the approach, so it seems likely to pass.

[For more on the Medicaid expansion in Arkansas, check out this article from Project Millennial. It’s really great.]

UPDATE: The Arkansas Department of Human Services is reporting that the state’s “private option” plan will cost about 13 to 14% more than providing coverage through traditional Medicaid, and that when other factors are included, that additional cost shrinks to almost nothing. Skeptics point out DHS only briefly explains how it arrived at these figures and there are  plenty of unanswered questions. Or, as The Arkansas Times points out in its thorough look at the report: “At this point, we have assertions, not equations.”

Next post: Why is Pennsylvania’s governor turning down the Medicaid expansion?