Warning: Use of undefined constant wp_cumulus_widget - assumed 'wp_cumulus_widget' (this will throw an Error in a future version of PHP) in /home/customer/www/whatifpost.com/public_html/wp-content/plugins/wp-cumulus/wp-cumulus.php on line 375
 Checking in on the fiscal cliff negotiations (and what they could mean for healthcare)
≡ Menu

After the election, we mentioned that that the first big task facing President Obama and Congress is hashing out a deal to avoid the upcoming “fiscal cliff.” In this post we’ll look at what each side has proposed, what the final deal might look like, and how it would affect health care.

First, what is the fiscal cliff?

The short answer: it’s a combination of tax increases and spending cuts scheduled to take effect automatically at the start of the new year. Tax increases and spending cuts aren’t inherently terrible– the problem is that so many are scheduled to happen all at once (altogether they add up to about 4% of GDP). Taking so much money out of  a recovering economy so quickly could push the US back into a recession– but simply repealing all the laws creating the “cliff” would drive up the deficit. No one wants either scenario, so Congress and the White House are negotiating to work out a plan that won’t hamper the recovery, but will reduce the deficit in the long-term.

That’s the short version anyways. To really understand what’s going on, check out The Washington Post’s “Absolutely Everything You Need to Know About the Fiscal Cliff in One FAQ.”

In a sign that negotiations have not been going well, Republicans leaked the White House’s opening bid in the negotiations. The Washington Post’s Ezra Klein summarizes:

What it would mean for healthcare
Those $400 billion in entitlement cuts, according to Republican aides, are the same ones in Obama’s proposed 2013 budget. The website ThinkProgress put together a chart detailing how those cuts break down: 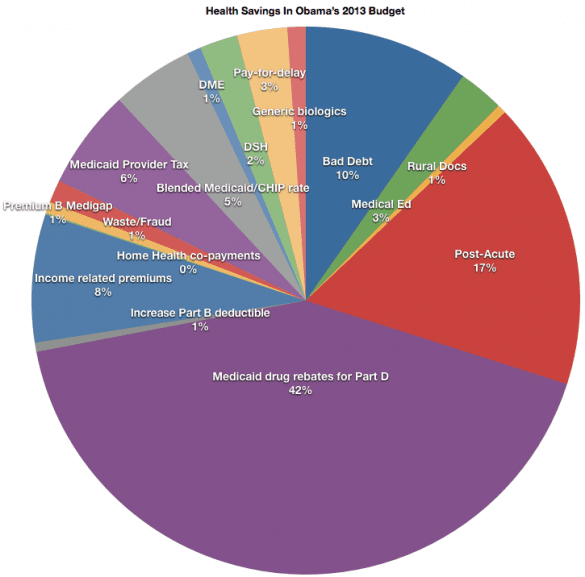 The biggest savings, by far, would come from applying Medicaid’s drug discount to “dual eligibles”: people who are enrolled in both Medicare and Medicaid. Medicaid gets a huge discount of about 45% on prescription drugs, but Medicare gets no set discount– each Medicare Part D plan (and remember, these plans are run by private insurers) negotiates with drug manufacturers individually, for an average discount of only about 19%. Currently low income seniors who are eligible for both Medicare and Medicaid get their drug coverage through the more expensive Medicare Part D. Shifting their drug coverage to Medicaid saves a lot of money, particularly because dual-eligibles are some of the highest users of prescription drugs, spending over $6100 per person on medication annually.

In a letter to President Obama signed by the rest of the House Republican leadership, Boehner suggests using a plan that Erskine Bowles described before Congress last November.

This is confusing for a couple of reasons. For one, Erskine Bowles was co-chair of President Obama’s debt commission, and that committee put forth a deficit reduction proposal that most people refer to as “Simpson-Bowles.” This is not that proposal.

Not only that, it’s not even Bowles’s own plan, as he explains:

In my testimony before the Joint Select Committee on Deficit Reduction, I simply took the mid-point of the public offers put forward during the negotiations to demonstrate where I thought a deal could be reached at that time. The Joint Select Committee failed to reach a deal, and circumstances have changed since then. It is up to negotiators to figure out where the middle ground is today.

Still, ignoring that it’s not actually Bowles’ plan, here’s what this “middle ground” that Boehner is proposing includes:

What it means for healthcare
In his testimony before the joint committee, Bowles noted that the midpoint between the Democratic and Republican proposals was around $600 billion in health care spending cuts. We assume that Boehner is proposing the same amount.

As far as specific cuts, some ideas that have been floated by Republicans are increasing the Medicare eligibility age from 65 to 67 and raising premiums for wealthy seniors. One thing to note, however, is that these ideas weren’t included in Boehner’s actual letter– they came from anonymous GOP aides. Mother Jones’ Kevin Drum points out, “That’s not a proposal at all, it’s a way of pretending to make a proposal that can be disavowed and denied at any time if it becomes inconvenient.”

In any event, these (non)proposals only add up to about $150 billion. As for where the other health spending cuts would come from, Republicans haven’t said.

The problem for Republicans, as both Ezra Klein and New York Magazine’s Jonathan Chait have pointed out, is that they don’t actually have a plan to cut Medicare spending. Here’s Ezra Klein:

That’s left Republicans in a peculiar negotiating position: They know they want “Medicare reform” — indeed, they frequently identify Medicare reform as the key to their support for a deal — but aside from premium support [vouchers], they don’t quite know what they mean by it, and they’re afraid to find out.

The solution they’ve come up with, such as it is, is to insist that the Obama administration needs to be the one to propose Medicare cuts. “We accepted this meeting with the expectation that the White House team will bring a specific plan for real spending cuts — because spending cuts that Washington Democrats will accept is what is missing from the balanced approach that the president says he wants,” Boehner spokesman Michael Steel said in regard to the most recent round of talks.

Democrats find this flatly ridiculous: Given that the Obama administration would happily raise taxes without cutting Medicare but that Republicans will only raise taxes if we cut Medicare, it falls on the Republicans to name their price. But behind their negotiating posture is a troubling policy reality: They don’t know what that price is.

Revenue
Most people in Washington think that the final deal will include about $1.2 trillion in revenue– the midpoint between the Republican and Democratic offers. Republicans want this revenue to come from “tax reform” instead of increasing taxes on the wealthy as President Obama has proposed. The problem with the Republicans’ approach is that there doesn’t seem to be a way to limit deductions without hitting the middle class.

Health care
There’s some overlap between President Obama and the Republicans on healthcare. Both would be fine with raising Medicare premiums for wealthy seniors, although this would only bring in about $20 billion over the next decade.

As for raising the Medicare eligibility age, many Democrats oppose it, but in the last round of deficit negotiations, Obama said he might be open to it. Jonathan Chait also notes:

Just because it’s doable, doesn’t mean it’s a good idea though. Medicare is pretty efficient and its costs have been growing slower than private insurance costs. According to the Center on Budget and Policy Priorities, raising the Medicare eligibility age would save the federal government $5.7 billion a year, but the rest of the health care system would spend $11.4 billion to provide those same benefits. 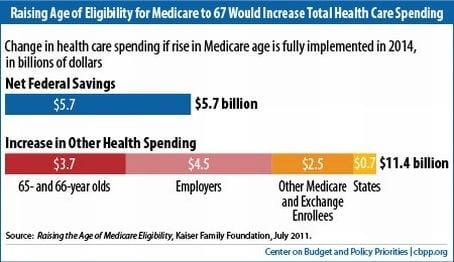 [The Washington Post’s Sarah Kliff has a great post explaining this graph here.]

Democrats might also accept changes to Medicaid that don’t cut benefits, like better coordination of care with Medicare for dual eligibles.

Of course, all of this assumes that there will be a deal. However, Republicans are apparently considering letting the economy go off the fiscal cliff, passing an extension of the middle class tax cuts and nothing else. We’ll have more on this so-called “Doomsday Plan” in our next post.

Next post: Fiscal cliff hanger: What if there’s no deal?

Previous post: Why the Medicaid expansion is a good deal for states, in 3 charts