Warning: Use of undefined constant wp_cumulus_widget - assumed 'wp_cumulus_widget' (this will throw an Error in a future version of PHP) in /home/customer/www/whatifpost.com/public_html/wp-content/plugins/wp-cumulus/wp-cumulus.php on line 375
 Calm down, part 2: Why we should be *encouraging* U.S. healthcare workers to help fight Ebola in west Africa
≡ Menu

Calm down, part 2: Why we should be *encouraging* U.S. healthcare workers to help fight Ebola in west Africa 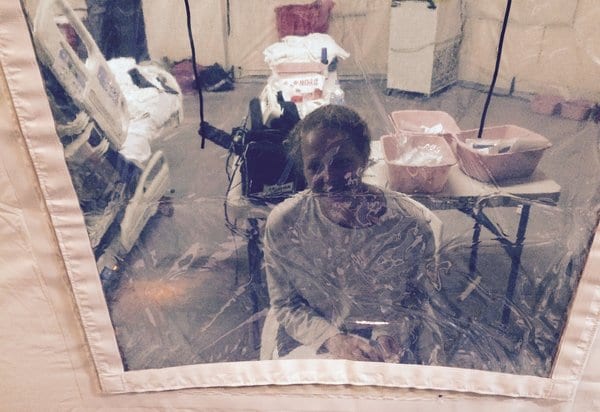 How NOT to treat healthcare workers who return from fighting Ebola in Africa.

Looks like our recent post, on why Americans should calm down about Ebola, worked: in a recent Washington Post/ABC News poll, 63% of respondents said they were “confident in the government’s ability to respond to an outbreak of the Ebola virus in the United States.”

That was the good news. We had hoped that the recent panic might lead more of us to support policies that would strengthen healthcare systems in west Africa, where the disease where the disease has been devastating. The bad news is that hasn’t happened:

An overwhelming 70 percent support restrictions on travel from afflicted countries (which helps explain why vulnerable Democrats have caved to Republican pressure and come out in support of one, too). And far more (61 percent) think we need to do more against Ebola in the United States than think we need to do more to stop the spread of it in Africa (46 percent).

Public health experts agree that to end the threat of Ebola in the United States, we need to stop its spread in west Africa. They also say that restrictions on travel– especially those targeting healthcare workers, like the mandatory quarantines announced by governors Mario Cuomo (D-NY), Chris Christie (R-NJ), and Pat Quinn (D-Ill.)— could actually increase the chances of future outbreaks here.

The risk of returning healthcare workers causing an Ebola outbreak in the U.S. is low

From The New York Times:

Doctors Without Borders (MSF) has sent 700 doctors and aid workers from around the world to Ebola-stricken countries. Of those, 270 are currently working there. Only three have contracted Ebola: a doctor from Norway, another from France, and now, an American.

We should also point out that the American in NYC is the only MSF worker who was diagnosed after returning home, and it’s extremely unlikely that he infected anyone else. Ebola is only contagious in those who are showing symptoms, and he, like other returning healthcare workers, was monitoring his temperature twice daily, and sought treatment as soon as he fell ill.

What we should be worried about is the virus spreading to other developing countries, in Africa and beyond

In the affected countries– Guinea, Liberia, and Sierra Leone– there have been about 10,000 confirmed cases so far. However, there have only been a handful of cases outside of those countries, because when the disease has shown up elsewhere, public health officials have been able to pinpoint the source and use what’s known as “contact tracing”– finding and monitoring anyone who was exposed to the infected person– to quickly stop its spread.

Two things make contract tracing much harder. One is not knowing where infected people are, which is why travel bans don’t work— people still manage to leave, but when they’re sneaking across borders they’re much harder to find and identify. The other is when too many people are infected in a given region to track down all the people they may have exposed. That’s what’s happening in Guinea, Sierra Leone, and Liberia right now, and as more people get infected, the greater chance that travelers will spread it to other countries with weak healthcare systems.

That, says Vox’s Ezra Klein, is what we should actually worry about:

The nightmare scenario for Ebola isn’t a handful of high-profile transmissions in America. It’s the outbreak’s continued exponential growth in West Africa, where more than half of all cases go unreported. It’s those shadow cases — people either unaware that they’re sick, mistrustful of health authorities, or fleeing the threat of quarantine — spreading the disease back to Nigeria, or giving it a footing in India. It’s 100,000 more cases emerging, and spreading the disease into yet more countries, more quickly, through more contacts than we can possibly trace.

And it’s once that happens — once the rest of the world is overwhelmed, and once contact tracing can’t keep up — that America will truly be threatened, because that’s when cases we can’t track begin coming into the country from disease clusters we didn’t know about. And that’s when Ebola will have the possible scale to begin overwhelming our defenses.

Klein points us to Charles Kenny, a fellow at the Center for Global Development, who writes that, “The lesson of the world’s efforts to stop other deadly diseases is that if we want to reduce our exposure to dangerous pathogens, we have to fight them where they are and when they emerge.” 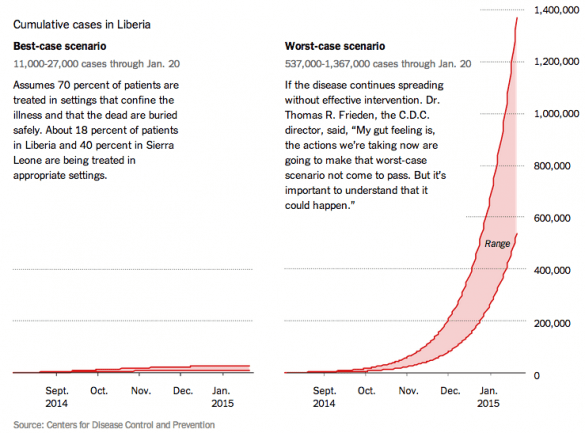 To stop the spread of Ebola in west Africa, we need health professionals who are willing to go there

The health systems in Guinea, Sierra Leone, and Liberia were in bad shape even before the outbreak. Liberia had only about 50 doctors serving its 4.4 million people, and was struggling with other serious diseases like cholera and malaria. Plenty of citizens of affected countries have stepped up to help, but there haven’t been nearly enough experienced doctors and nurses to train and supervise them. (As one U.S. doctor from Brigham and Women’s Hospital in Boston, now training health workers in Liberia, pointed out, “The whole country of Liberia has fewer physicians than one single floor of Brigham and Women’s.”)

Meanwhile, international aid organizations have had a hard time recruiting healthcare workers– in large part due to fear of the disease. The International Medical Corps got just seven responses to its first appeal for help— by contrast, after the earthquake in Haiti four years ago it got 2,000. Recently healthcare professionals have begun to respond to the increasingly desperate appeals, but the slow initial response has already taken its toll:

Because months went by this summer in which almost no volunteers could be found, and because it takes time to train them and get them to Africa, there remains a yawning gap between the number of medical professionals needed and those in place to do the work. Each 100-bed hospital needs a staff of 400, about 40 of whom are foreign doctors or nurses. Meanwhile, about 600 Ebola cases are being recorded every week, according to the World Health Organization, and that number doubles every three weeks.

Aid agencies also have strict criteria for who they will send to the affected countries. MSF is only sending people who have been on previous MSF missions, and the deployments are much shorter than usual:

“The stress they will have in the field is so high that we don’t want to add any of the stress from a first (time) missioner who discovers Africa, who discovers the MSF culture,” [a spokesperson] explains, adding that while normal MSF project commitments last six months and emergency response missions are three, the maximum length of these Ebola deployments is five weeks.

So the last thing we want to do implement policies that discourage health workers from going there to help out. Yet that’s exactly what the governors’ quarantines in New York, New Jersey, and Illinois may end up doing. Kaci Hickox, the first nurse to be quarantined in New Jersey, after she returned from Sierra Leone and despite showing no symptoms, described her ordeal in The Dallas News:

This is not a situation I would wish on anyone, and I am scared for those who will follow me.

I am scared about how health care workers will be treated at airports when they declare that they have been fighting Ebola in West Africa. I am scared that, like me, they will arrive and see a frenzy of disorganization, fear and, most frightening, quarantine.

Luckily, governors Cuomo and Christie have backed off a bit, saying that quarantined health workers could stay at home and have visitors (instead of in an isolation tent, which is where Hickox has been kept), and the state would replace any lost pay. Still, as The New Republic’s Jonathan Cohn has written, “It’s hard to see how the Christie-Cuomo quarantine does much good—and easy to see how it could do harm.”

We should be grateful to American healthcare workers who are willing to fight Ebola in Africa, especially since it’s in our interest too. They’re doing a dangerous, stressful job, although as one CDC worker in Sierra Leone put it:

“It’s not as scary as you think. I think it’s scarier in the U.S. watching the news.”

UPDATE: From an editorial in the New England Journal of Medicine:

“We should be honoring, not quarantining, health care workers who put their lives at risk not only to save people suffering from Ebola virus disease in West Africa but also to help achieve source control, bringing the world closer to stopping the spread of this killer epidemic.”

Next post: Why the 2014 midterms are a big deal for Obamacare