Warning: Use of undefined constant wp_cumulus_widget - assumed 'wp_cumulus_widget' (this will throw an Error in a future version of PHP) in /home/customer/www/whatifpost.com/public_html/wp-content/plugins/wp-cumulus/wp-cumulus.php on line 375
 Calm down, Ebola’s actually pretty difficult to catch
≡ Menu 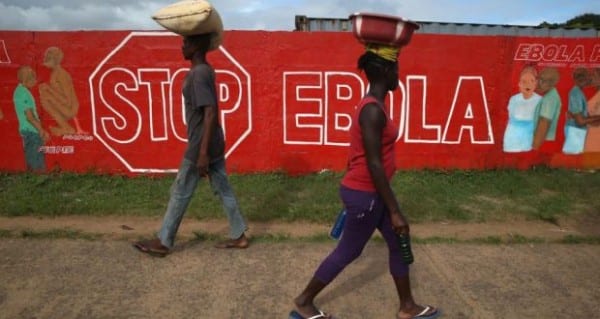 Ok, so we’ve avoided covering Ebola for months, mostly because we didn’t want to add to any unnecessary panic about the disease (although it looks like that ship has sailed). If you’re reading this site, chances are you live in a country with regular electricity and more than 50 doctors, which means Ebola really isn’t something you have to worry about. Notice that we used the present tense there– even though there are now three confirmed cases in the U.S. (the original patient and two nurses), there’s still no reason to panic.

We think that a lot of the current hysteria comes from the fact that while the President, public health officials, and the more responsible members of the media have told us not to worry, they haven’t done a great job of communicating why we shouldn’t worry.

Why is Ebola hard to catch?

As you may have heard by now, you can only get Ebola through direct contact with bodily fluids from someone who is showing symptoms of the disease. Early Ebola symptoms are basically the flu-like symptoms that set the flu apart from a common cold: fever, head and muscle aches, diarrhea, stomach pain, and vomiting. Also, direct contact means that their bodily fluids (blood, saliva, mucus, sweat, vomit, urine, or feces) have to come in contact with your bodily fluids, through your eyes, nose, mouth, or an open wound.

According to the CDC, Ebola can live outside the body for a little while– on dried surfaces like door handles or table-tops for just a few hours, and in bodily fluids (like a puddle of blood or urine) for a few days. However, a 2007 study in the Journal of Infectious Diseases took samples from many exposed surfaces in an Ebola ward in Uganda in 2000 and none tested positive for the disease. Also, we should note that Ebola is killed by common disinfectants like bleach.

There’s no evidence that Ebola is transmitted through the air, like measles or chickenpox. That’s not to say airborne transmission is impossible, but unless you’re in Liberia or treating someone in the later stages of Ebola, it’s not something you have to worry about. There may be a tiny chance of getting Ebola if a very sick person coughed or sneezed on you, but keep in mind that coughing, sneezing, and runny nose are not symptoms.

Also, even people who are showing symptoms aren’t that contagious early on. Any Ebola patient will have the virus present in their blood and probably feces, but in other fluids it’s less likely, particularly in early stages. For example, some studies have found Ebola present in saliva, while others have not. The authors of this and other studies conclude that patients are much more likely to be contagious (i.e., the virus shows up in greater concentration in more types of bodily fluid) in later stages of the disease.

So even if you were on the plane with the U.S. nurse who contracted Ebola (who was reporting only a slight fever), unless you somehow came in contact with her blood or feces, you’d be very unlikely to get the disease.

All of this is why experts, like Dr. Joel Selanikio, a former U.S. Centers for Disease Control and Prevention (CDC) epidemiologist, say things like:

“Ebola is not a terribly infectious disease. It’s quite difficult to get.”

We should be listening to them and not the pundits and politicians who benefit from scaring us. (If you want more info, the CDC has excellent, easy-to-understand guides to symptoms and transmission.)

But what if it mutates?

One concern we’ve seen batted around the media is that the virus might mutate and become airborne. The chance of that happening is extremely remote, as Vincent Racaniello, a virologist at the College of Physicians and Surgeons at Columbia University explains:

When it comes to viruses, it is always difficult to predict what they can or cannot do. It is instructive, however, to see what viruses have done in the past, and use that information to guide our thinking. Therefore we can ask: has any human virus ever changed its mode of transmission?

The answer is no. We have been studying viruses for over 100 years, and we’ve never seen a human virus change the way it is transmitted.

Another concern is that the virus has already mutated (or could) so that the “viral load” is higher– in other words, it’s still transmitted only through direct fluid-to-fluid contact, but people who are infected are carrying more of the virus, so they may be able to spread it before they show symptoms. Again, while that’s a remote possibility, so far the experience here contradicts that theory– the Liberian patient had casual contact with many people in the U.S., but the only people he infected were nurses at the hospital where he was treated.

Well, if it’s so hard to catch, why does it keep popping up in nurses who are taking every precaution?

Nurses– way more than doctors even– come very close to a lot of bodily fluid over the course of caring for patients, particularly those who are very sick. Administering medication, taking temperatures, changing IV lines, and cleaning up blood and feces are all part of the hands-on care nurses provide. (The biggest complaint my one hospital nurse friend has about her job is the amount of poop she has to handle on a daily basis.)

Even though nurses treating Ebola patients wear protective gear, they have to get it off, which is a complicated process. Since they’re coming into contact with so much bodily fluid over the course of their job, and since they’re dealing with late stage patients who are much more likely to be contagious, an innocent slip-up could result in contamination. That’s why the CDC is saying it will provide special support staff to help with any future Ebola cases.

Still, nurses can and do isolate patients without getting sick themselves. What we’re discovering now is that healthcare workers in Dallas didn’t wear protective suits until they confirmed their patient had Ebola, meaning they were treating him without protection for two days while he was showing symptoms.

All right, if it’s so hard to catch, why do so many people have it in west Africa then?

The countries where Ebola is spreading have very little health infrastructure. For example, before the outbreak Liberia only had about 50 doctors… serving a country of 4.3 million people. To get a sense of how disastrous that’s been in stopping the disease, we highly, highly recommend checking out this short documentary from VICE:

What you’ll see in the video is that the country’s few hospitals are totally overwhelmed– there’s no room for additional patients, so many are being sent back to their homes, where their families act as their nurses– but often without the protective gear nurses here can use to protect themselves. (Even medical workers in Liberia are facing an enormous lack of supplies.) You’ll also notice that the VICE reporter comes pretty close to people who definitely have Ebola, and he didn’t contract the disease.

Here in the United States we have the resources to properly handle Ebola patients and track down and monitor those they’ve come in contact with. If you don’t believe the CDC, consider that Nigeria, a country with a much worse health infrastructure than here, managed to quickly stop the spread of the disease after it arrived there in July. So far there have only been 20 confirmed or probable cases (in a country of 174 million people), and Nigeria is on track to be officially Ebola free in less than a week.

Why don’t we institute a travel ban to infected countries, just to be safe?

For starters, this would be almost impossible to implement. Thomas Duncan, the U.S. patient who contracted Ebola in Liberia, flew through Brussels, so for a travel ban to work, we’d have to coordinate with every other country that has flights to the U.S. Even though Ebola transmission is difficult, it’s not impossible– West Africans could still fly to other countries and infect people there who then come here.

So when people talk about a travel ban, what they’re really talking about is quarantine: preventing anyone from leaving affected countries. This is a terrible idea. As Tom Frieden, the director of the Centers for Disease Control, explains, people will find a way to get out of those countries “even when governments restrict travel and trade. And that kind of travel becomes almost impossible to track.”

As Marc Siegel, a medical professor at NYU adds, “A tried-and-true method of slowing the spread of an outbreak is known as contact tracing — isolate victims and then identify and follow the contacts of the sick person.” That gets much harder to do if potential Ebola carriers are sneaking into and out of their countries.

A travel ban would also make it harder to get medical personnel and supplies into affected areas. Ignoring, for a second, what a humanitarian disaster that would be, looking at it from a standpoint of pure self interest a travel ban also makes future U.S. Ebola cases more likely.

Right now, your chances of catching Ebola in the United States are miniscule– you’re more likely to die from getting struck by lightning or stung by bees. Still, it’s not zero, and the more cases there are in countries like Liberia, Guinea, and Sierra Leone, the more likely it is to pop up here again, travel ban or no. So worry about Ebola there, not here.

Unsurprisingly, The Daily Show has the best coverage of the Ebola scare we’ve seen so far:

Next post: The Obamacare question that Republican candidates won’t answer

Previous post: No, 10% of adults don’t have more than ten drinks a day (but they do have a lot)