Warning: Use of undefined constant wp_cumulus_widget - assumed 'wp_cumulus_widget' (this will throw an Error in a future version of PHP) in /home/customer/www/whatifpost.com/public_html/wp-content/plugins/wp-cumulus/wp-cumulus.php on line 375
 Blockaid: Paul Ryan’s Proposal for Medicaid
≡ Menu 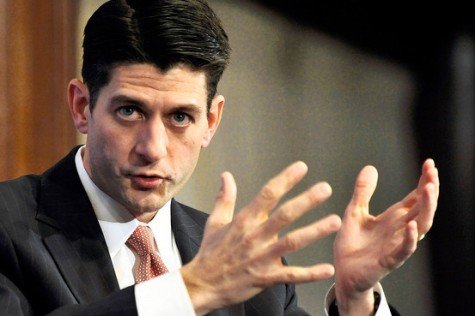 The more we dig into Paul Ryan’s budget proposal, the more we start to see a theme in the way it deals with health care: cost shifting. It solves the federal government’s budget problem not by reducing the underlying cost of care, but by shifting the responsibility for paying for those costs onto others.

Our last post talked about how Ryan’s voucher plan for Medicare shifts the burden of paying for health care onto individual seniors. In a similar way, his “block grant” proposal would simply shift Medicaid costs from the federal government onto the states, who could end up shifting their costs then onto the poor, disabled, and elderly.

Who uses Medicaid?
Most people assume that Medicaid is just a program for the poor, but that view isn’t completely accurate. It’s true that around 75% of Medicaid enrollees are low income adults and children, but the majority of Medicaid’s spending (about two-thirds of it) goes to seniors and people with disabilities. 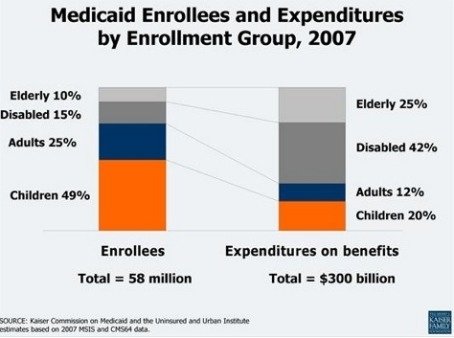 What is a block grant?
Under a block grant system, the amount that the federal government pays each state is capped to a predetermined amount each year.

The advantage of block grants, according to Ryan and other conservative governors who are pushing for them, is flexibility. However, as The Washington Post‘s Ezra Klein points out:

The problem with Ryan’s block grant plan
The problem with Ryan’s plan though isn’t necessarily the block grants themselves– it’s the massive cut in finding that comes along with them. For example, conservatives point to Rhode Island as a successful example of block grants. In 2009, the state accepted a block grant from the Bush administration that capped the amount of federal Medicaid funding it could receive for five years, in return for increased flexibility over the program. Since then, state Medicaid expenditures declined. So why not convert Medicaid in every state to a block grant?

And that decrease in state Medicaid expenditures? That was largely due to $400 million in federal stimulus funding– money that the state would have received with or without the block grant. And CBPP points out that many of the cost containment measures that Rhode Island put into place could have been done without the block grant waiver.

At best, Rhode Island shows that a block grant system can work if the level of the grant is set really, really high. But that’s not what Congressman Ryan has proposed.

Instead, Ryan’s budget proposal would cut $771 billion from Medicaid over the next ten years. The block grants would start in 2013 at levels– well below what the existing system would provide. Federal Medicaid funding would be cut another 35 percent by 2022 and 49 percent by 2030, according to the Congressional Budget Office.

To make up the federal funding shortfall, states would have two options. The CBO says they could:

Most states are already facing budget crises– for many, finding extra money to make up for a massive shortfall in federal Medicaid funding is unlikely. As for the second option, provider rates are already really low (so low in fact, that many Medicaid recipients have trouble finding doctors who will accept them) and the program is already targeted at those who most need assistance. For these reasons, even the libertarian economist Tyler Cowen says, “Medicaid should be one of the last parts of the health care budget to cut.”

Unfortunately conservatives may be gunning for Medicaid, after strong opposition to Ryan’s Medicare plan seems to have killed it for now. Partly because of who it serves– the poor don’t have the same political clout as seniors. Although a New York Times article points out that Medicaid cuts could have a huge impact on the elderly:

According to the Kaiser Family Foundation, which analyzes health care issues, 7 of 10 nursing home residents are on Medicaid, in large part because even middle-class patients often run through their savings while in a nursing home and turn to the entitlement program.

But Republicans are also targeting Medicaid because they share responsibility with states, giving them political cover. Like we mentioned earlier, the massive spending reductions won’t give states many options, other than the “flexibility” to drastically cut health care for the poor, disabled, and elderly. Says CBPP president Bob Greenstein:

“You can shift costs to states so they can be the bad guys while the federal policymakers pretend they didn’t hurt anybody.”

Meanwhile, just like his Medicare proposal, Ryan’s Medicaid plan ignores the underlying problem of rising costs. In the end, it simply shifts responsibility for paying those costs onto the people the program is meant to serve, which, in the case of Medicaid, are those who can least afford it.

Next post: Vermont takes another step towards single payer