Warning: Use of undefined constant wp_cumulus_widget - assumed 'wp_cumulus_widget' (this will throw an Error in a future version of PHP) in /home/customer/www/whatifpost.com/public_html/wp-content/plugins/wp-cumulus/wp-cumulus.php on line 375
 Explainer: the basics of Obamacare
≡ Menu

Explainer: the basics of Obamacare 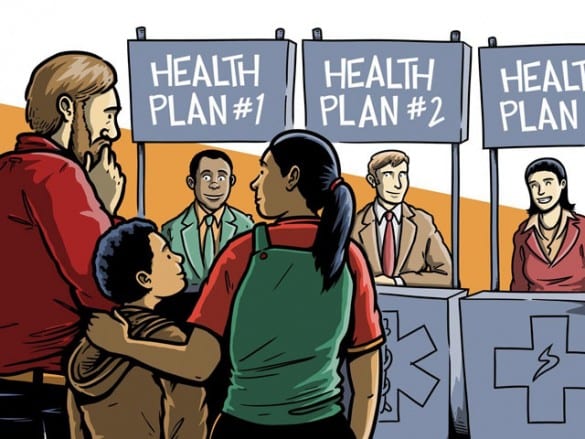 As Obamacare enters its third year, there are still some big gaps in understanding. While many people are aware that they have to buy coverage or pay a penalty, many don’t know where to get that coverage or that there are subsidies (which in some cases are very large) available to help them pay for it.

We think we can help with our guide to the who, what, where, when, why and how of getting covered by Obamacare.

Who gets covered through Obamacare

Obamacare really only affects you if you’re currently (1) uninsured or (2) paying for your own coverage (and not through an employer).

So if like the vast majority of Americans, you get coverage through your job, or Medicare, or Medicaid, or the military, you can stop reading here. If you end up without coverage sometime in the future, come back and read all this, but until then, just relax and watch this video of a cat in a shark costume chasing a duck from atop a Roomba:

As for the rest of you, here’s how Obamacare works.

Where to get coverage

Healthcare.gov is the starting point for everything. Go there, enter your state, and it will take you to an online marketplace (aka “exchange”) where you can shop for coverage.

If you need help, there’s phone support and specially trained “navigators”– members of social service or advocacy groups (think churches, business groups, farm groups, community health centers, etc.) available to help guide you through the process. Go here to find one near you. You can also go to a regular health insurance agent for information.

When to get coverage

November 1 – January 31. This is the “open enrollment period,” meaning anyone can buy insurance then (although your coverage won’t start until January 1).

You can also buy coverage after January 31 during a special enrollment period, but only if you have a major life event. These include:

In most cases you have 60 days after the event to get new coverage. What this also means is that you can’t wait until you get sick to get coverage, because again, unless you have one of those major life events listed above, once February 1 rolls around you’ll be out of luck until next November. The one exception is if you qualify for Medicaid, you can apply for that year round.

What kind of coverage can you get?

Private insurance is broken into different levels– bronze, silver, gold, and platinum— based on their “actuarial value,” which, if you’re not an insurance company, will mean nothing to you. Really it’s just a way to tell how good the plans are. All you need to know is that bronze plans will be cheapest, but have higher deductibles and copays, while higher ranked plans will be more expensive, but have lower (or no) out-of-pocket costs.

How much you’ll pay for coverage/how the subsidies work

If you qualify for Medicaid, your coverage is basically free. The catch is that you have to be living in a state that opts into the new law’s Medicaid expansion (the Supreme Court decision made it optional for states to participate). If your income is below the poverty line and your state doesn’t expand Medicaid you won’t be able to get any coverage. This map shows the status of the expansion in each state as of November 2015: 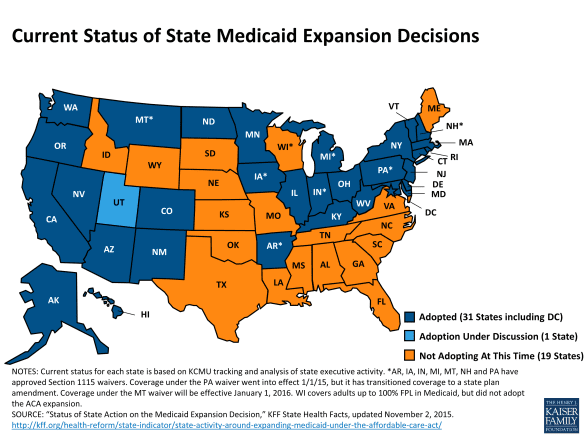 If your income is higher than $11,770, what you pay for insurance will be on a sliding scale based on how much you make, thanks to federal subsidies. Once you enter your income on the site, the subsidy will automatically be included in the price of every insurance plan you see– there’s no separate application and you don’t have to pay full price and then wait from a check from the government or anything like that.

Most people we’ve talked to didn’t realize that the subsidies can be pretty substantial, especially at the lower end of the income scale. For example, Anna is a 26-year old freelance writer without children living in Pittsburgh, who makes about $15,000 per year. She’ll be able to get a silver-level plan for $25/month or she can probably get a bronze plan for free. (She’d also qualify for free coverage under Medicaid… if Pennsylvania opts into the law’s Medicaid expansion.)

Besides the obvious reason of being able to get care without going broke, there’s also that penalty for not having coverage. The penalty has been phased in over the past few years, but in 2016 it’s in full effect: $695 per person or 2.5% of your household’s income, whichever is greater. Penalties for kids are half the amount for adults, and if affordable coverage isn’t available (say you make less than $11,770 per year and live in a state that doesn’t expand Medicaid, for instance) you’re exempt from paying it.

Ok, those are the basics of getting coverage under Obamacare. Have any Obamacare questions? Let us know in the comments and we’ll do our best to answer!

Previous post: The campaign to educate young people about Obamacare… and the GOP push to stop it