Warning: Use of undefined constant wp_cumulus_widget - assumed 'wp_cumulus_widget' (this will throw an Error in a future version of PHP) in /home/customer/www/whatifpost.com/public_html/wp-content/plugins/wp-cumulus/wp-cumulus.php on line 375
 Avoiding another debt ceiling crisis
≡ Menu 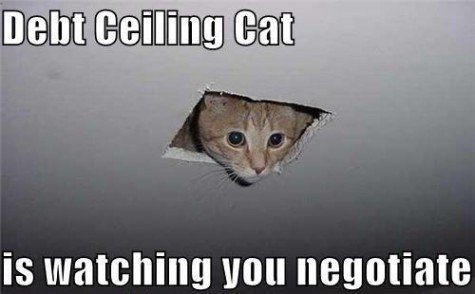 One bright side of Republicans once again threatening to trigger a worldwide financial crisis by failing to raise the debt ceiling: The return of debt ceiling cat!

For those of you who were hoping  that Washington was done with self-imposed crises that could wreck the economy… we have some bad news. Congress may have avoided the fiscal cliff, but in a couple months we’ll hit the debt ceiling, and the consequences could be much, much worse.

Just like in 2011, Republicans are threatening to not raise the debt limit (and possibly destroy the global economy) if Democrats don’t agree to massive cuts in federal spending on programs like Medicare. This time around though, President Obama has said that he won’t let the economy be held hostage. Luckily there are three ways he might be able to avoid a crisis if Republicans refuse to budge.

Section Four of the 14th amendment to the Constitution says:

The validity of the public debt of the United States, authorized by law, including debts incurred for payment of pensions and bounties for services in suppressing insurrection or rebellion, shall not be questioned.

It was meant to ensure the payment of Union debt after the Civil War, but some people (including former President Bill Clinton) have argued that the provision more generally means that the United States failing to pay its debts is unconstitutional– thus the White House can act unilaterally to raise or ignore the debt ceiling. But it’s far from clear whether courts would agree that the amendment actually gives the President that power. As the New York Times reported during the last debt ceiling crisis:

In recent weeks, law professors have been trying to puzzle out the meaning and relevance of the provision. Some have joined Mr. Clinton in saying it allows Mr. Obama to ignore the debt ceiling. Others say it applies only to Congress and only to outright default on existing debts. Still others say the president may do what he wants in an emergency, with or without the authority of the 14th Amendment.

In any event, the White House believes it can’t invoke the 14th amendment here. During the last round of debt ceiling discussions, President Obama said, “I have talked to my lawyers. They are not persuaded that that is a winning argument.”

Some highly respected economists and financial people, including Bill Gross, the nation’s biggest bond investor, Bush administration economist Donald Marron, and Nobel laureate and New York Times columnist Paul Krugman, have argued that the White House can get around the debt ceiling by printing a trillion dollar platinum coin.

The idea takes advantage of a law designed to give the Treasury secretary the power to mint commemorative coins in any denomination (for paper money and other types of coins there are rules about the denominations that can be printed). Phillip Diehl, former director of the U.S. Mint and Treasury Chief of Staff who co-wrote the platinum coin law with Rep. Mike Castle, explains why it would work:

* In minting a $1 trillion platinum coin, the Treasury Secretary would be exercising authority that Congress has granted routinely for more than 220 years […] What is unusual about the law is that it gives the Secretary discretion regarding all specifications of the coin, including denominations.

* The accounting treatment of the coin is identical to the treatment of all other coins. The Mint strikes the coin, ships it to the Fed, books $1 trillion, and transfers $1 trillion to the Treasury’s general fund where it is available to finance government operations just like with proceeds of bond sales or additional tax revenues. The same applies for a quarter dollar.

* There are no negative macroeconomic effects. This works just like additional tax revenue or borrowing under a higher debt limit. In fact, when the debt limit is raised, Treasury would sell more bonds, the $1 trillion dollars would be taken off the books, and the coin would be melted.

* This does not raise the debt limit so it can’t be characterized as circumventing congressional authority over the debt limit. Rather, it delays when the debt limit is reached. Those who claim otherwise are misinformed or pursuing an agenda.

* Any court challenge is likely to be quickly dismissed since (1) authority to mint the coin is firmly rooted in law that itself is grounded in the expressed constitutional powers of Congress, (2) Treasury has routinely exercised this authority since the birth of the republic, and (3) the accounting treatment of the coin is entirely routine.

The biggest problem with the trillion dollar coin idea is that it sounds silly. As usual, Ezra Klein puts it well:

The platinum coin is an attempt to delay a reckoning that we unfortunately need to have. It takes a debate that will properly focus on the GOP’s reckless threat to force the United States into default and refocuses it on a seemingly absurd power grab by the executive branch. It is of no solace that many of the intuitive arguments against the platinum coin can be calmly rebutted. It’s the wrong debate to be having.

Fortunately there may be a way to avoid financial calamity without letting Republicans off the hook for threatening to cause one. The government could continue to pay it’s debt, but other categories of people, like government contractors would get IOU’s. California did this in 2009:

Beginning in July of that year, California addressed its budget crisis by issuing 450,000 registered warrants, totaling $2.6 billion, to individual and business claimants, including recipients of aid programs, recipients of tax refunds and government contractors. Those holders who needed immediate cash were usually able to sell their registered warrants to banks at face value, though some institutions limited such purchases.

Whether as a result of public shaming, pressure from banks or a newfound sense of responsibility, the Legislature quickly worked out a budget deal and the scrip was then redeemed for cash.

New York Magazine’s Jonathan Chait explains how this scenario could play out in the current debt ceiling crisis:

House Republicans have failed to lift the debt ceiling, sparking a crisis. The administration is responding to the crisis and neutralizing, as best as it can, the economic damage caused by crazy Republicans. Government contractors are getting IOUs, keeping them in business, but not making them terribly happy. Then they start screaming at the House Republicans to stop being crazy people and just raise the debt limit already. That would have the benefit of inflicting political harm on the hostage takers and likely make them both take responsibility for the solution and shy away from weaponizing the debt limit again.

The plan isn’t without drawbacks though– it would require a lot of prep time to work and it depends largely on how the markets react to it.

Ideally Congress will just raise the debt limit without the White House having to resort to one of these fallback plans, but it’s good to know that there are options. A trillion dollar platinum coin might sound ridiculous, but it’s less ridiculous than allowing Republicans to wreck the U.S. economy if they don’t get what they want.

UPDATE (1/14/13): The Washington Post reports that The White House will not mint a platinum coin to get around the debt ceiling:

That’s the bottom line of the statement that Anthony Coley, a spokesman for the Treasury Department, gave me today. “Neither the Treasury Department nor the Federal Reserve believes that the law can or should be used to facilitate the production of platinum coins for the purpose of avoiding an increase in the debt limit,” he said.

Next post: Do we really have to worry about a doctor shortage?

Previous post: How the fiscal cliff deal does (and does not) affect health care