Warning: Use of undefined constant wp_cumulus_widget - assumed 'wp_cumulus_widget' (this will throw an Error in a future version of PHP) in /home/customer/www/whatifpost.com/public_html/wp-content/plugins/wp-cumulus/wp-cumulus.php on line 375
 A response to Mad As Hell Doctor Sam Metz
≡ Menu

A response to Mad As Hell Doctor Sam Metz 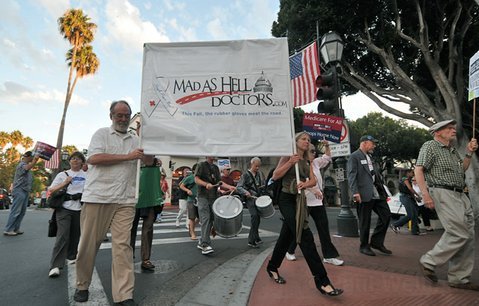 Recently the New York Times asked for responses to a Letter to the Editor written by Sam Metz, a founding member of the single-payer advocate group Mad as Hell Doctors. Metz writes:

Other industrialized countries have national health plans providing care to more citizens at less cost with better outcomes than our system. And they don’t use mandates that allow insurers to charge different prices for different people.

In our response we wanted to add some successful examples of single-payer from closer to home:

One point to add to Dr. Metz’s letter, for those who will surely argue that the “socialized medicine” he advocates will never work here in America: it already does.

Medicare, of course, provides universal coverage for our nation’s elderly, at a lower cost than private insurance. Illustrating this point, a recent Kaiser Family Foundation study found that raising the Medicare eligibility age from 65 to 67 would save the government $5.7 billion, but increase total health care spending by twice that, as those seniors moved to private insurance (or went without coverage).

Or take the Veterans Health Administration, where not only does the government pay for care, it owns the hospitals and employs the physicians. The Annals of Internal Medicine found that VHA patients often have better health outcomes– including mortality– than those of private insurance or Medicare, and for less money.

National health plans have worked abroad, and they’ve worked for our seniors and veterans here at home. There’s no reason we shouldn’t consider one for all Americans.

One more thing- it is possible to support both single-payer and the health reform law that was passed.  Another response to Metz’s letter by Bruce Kelley in Minneapolis perfectly captures our thoughts on the matter:

We need Dr. Metz to keep the flame of national health insurance alive until this country is ready to embrace it as the most cost-effective way to provide coverage. But as Winston Churchill said, “You can always count on Americans to do the right thing — after they’ve tried everything else.”

The battle to pass the Affordable Care Act and the challenge to sustain it should make clear that national health insurance will not be given serious consideration by politicians for some time.

Our approach to health reform has desirable features, like elimination of pre-existing condition exclusions. An individual mandate is required to make health reform work.

Dr. Metz simply prefers another way to require all Americans to have coverage. More power to him. In the meantime, let’s try the next best thing.

Next post: The U.S. pays its doctors more… a lot more