Warning: Use of undefined constant wp_cumulus_widget - assumed 'wp_cumulus_widget' (this will throw an Error in a future version of PHP) in /home/customer/www/whatifpost.com/public_html/wp-content/plugins/wp-cumulus/wp-cumulus.php on line 375
 A recent study in Massachusetts shows that Obamacare could save thousands of lives
≡ Menu 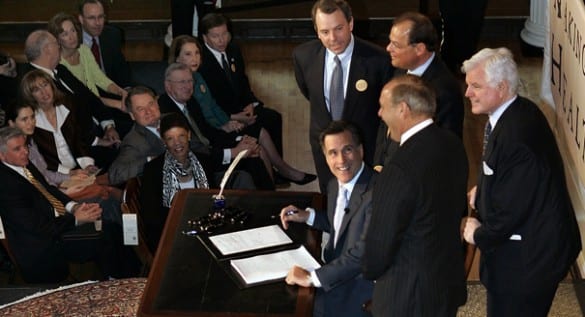 One of the many, many, many points of disagreement between Obamacare supporters and critics is over whether the new law will save lives. Supporters say that of course it will, pointing to stories about how people who got insurance stopped putting off surgery or skipping needed medicine. Opponents claim that the uninsured can get life-saving treatment in emergency rooms, and if they have worse health outcomes it’s for other reasons.

As for actual data, estimates for the effect of insurance on mortality have been all over the place. At the high end, a study done by researchers at Harvard medical school found that 45,000 people die each year because they lack insurance. On the other end of the spectrum, a study by Richard Konick at UCSD found no different risk of dying between the uninsured and those with employer-sponsored health insurance. That study is an outlier though– the overwhelming majority of studies have shown at least some connection between having insurance and better health.

However, none of those studies was a randomized controlled trial (RCT). In an RCT, they would take a bunch of uninsured people, randomly give some of them health coverage, and then see if there was any difference in the mortality rate between the two groups over time. It’s really the only way to prove that health insurance is the cause of improved health, and not something else that those without insurance tend to have in common. (The uninsured are more likely to be low-income, black or latino, and/or unemployed– all things that are also associated with worse health.)

So why hasn’t there been a study like that? The challenge, as Harold Pollack, a professor of social service administration at the University of Chicago, points out, is that deaths among the non-elderly are rare. For adults between the ages of 25 and 64 in the U.S. (the group most likely to be uninsured) the mortality rate is less than 0.4 percent. To detect a change in such a small figure would require a massive study with hundreds of thousands of participants across the country over many years. Such an experiment would be too expensive and impractical, but researchers may have found the next best thing in Massachusetts.

Massachusetts, as you might remember from the national health reform debate, was the model for Obamacare. In 2007, under Governor Mitt Romney, the state created online insurance marketplaces, provided income-based subsidies to help pay for premiums, and included an individual mandate saying that people had to get covered or pay a penalty. Thanks to “Romneycare,” as it’s often called, the state’s uninsured rate dropped to just 4%.

Since at the time Massachusetts was the only state doing these things, it created a “natural experiment.” The New Republic’s Jonathan Cohn explains how it worked:

Enter three well-credentialed, well-respected health care economists—Benjamin Sommers and Katherine Baicker, from the Harvard School of Public Health; and Sharon Long, a senior fellow at the Urban Institute. The trio obtained figures on mortality and, better still, they were able to isolate causes of mortality “amenable to health care.” In other words, they were able to get data on cancers, various cardiac problems, and other conditions that, with better medical care, people should be more likely to survive. Then they compared how the people in Massachusetts fared relative to groups of people from around New England, who were similar in almost every meaningful way—age, income, and so on—except that they lived in states where similar expansions of health insurance were not underway.

The Congressional Budget Office estimates that 20 million people who were uninsured will get coverage through Obamacare. If the results in Massachusetts hold true for the whole country, 24,000 lives would be saved every year. (Although there are plenty of reasons why other states might see different results. Massachusetts worked very hard to promote insurance signups, so states that did less might see a smaller drop in mortality. On the other hand, Massachusetts is a wealthy state that already had one of the lowest uninsurance rates in the country– reasons why states with lower incomes and higher uninsurance rates could see even bigger gains.)

We should point out that the Massachusetts study isn’t a true randomized-control trial, since people weren’t randomly assigned– there might be some other factor that Massachusetts residents have in common that would explain the drop– but the researchers worked to eliminate every other possible explanation they could think of. For example, in addition to comparing specific communities to others with similar ages, income, racial make-up, unemployment rates, etc., they found that mortality rates among the elderly in Massachusetts were basically unaffected by the 2006 reforms—which makes sense because almost everyone in this group is covered through Medicare.

“The sheer craftsmanship of this study makes it a pleasure to read (at least, if you’re a health wonk like me).”

Even some conservatives have said they’re impressed with how careful the researchers were. Avik Roy, a columnist at Forbes and adviser to Mitt Romney in the 2012 election, says “this study was constructed with sufficient care, and the findings are robust enough, to be persuasive, at least to me.”

Although, as you can probably guess, even though these conservative healthcare experts respect the quality of the study, they’re still trying to debunk it. We’ll look at what they’re saying (and why they’re probably wrong), in our next post.

Next post: What Obamacare’s critics are saying about a new study showing that it could save lives (and why they’re probably wrong)

Previous post: Nearly half of all Americans live in places with unsafe levels of air pollution. Here’s how the EPA is trying to change that.