Warning: Use of undefined constant wp_cumulus_widget - assumed 'wp_cumulus_widget' (this will throw an Error in a future version of PHP) in /home/customer/www/whatifpost.com/public_html/wp-content/plugins/wp-cumulus/wp-cumulus.php on line 375
 A question for Paul Ryan
≡ Menu

A question for Paul Ryan 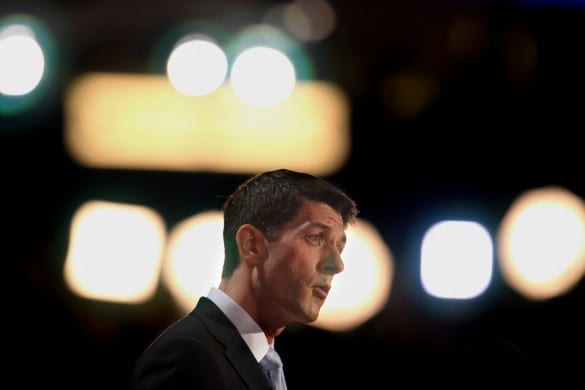 As you may have heard, Paul Ryan’s keynote address to the Republican National Convention was more than a little loose with the facts. Even Fox News had to admit it was dishonest, with one contributor stating, “Ryan’s speech was an apparent attempt to set the world record for the greatest number of blatant lies and misrepresentations slipped into a single political speech.”

On health care, Ryan once again criticized President Obama for “funneling” $716 billion out of Medicare to pay for Obamacare. As we’ve pointed out before, this type of language is misleading, because it sounds like the money was taken out of the Medicare piggybank, when in reality that $716 billion is a reduction in future wasteful spending.

However, what we’re interested in is something Ryan didn’t say. He failed to mention that as chair of the House Budget Committee, both of his proposed budgets (which nearly every House Republican voted for) contain the exact same cuts to Medicare. His bills would repeal the entire Affordable Care Act except the $716 billion in Medicare savings. That brings up an obvious question:  If Ryan believes the cuts are so terrible, why did he keep them?

Fortune Magazine put that question to Eric Cantor, who as House Majority Leader, helped push Ryan’s budgets through the House. Here was his (non)response:

“The assumption was that, um, the, the, ah, again — I probably can’t speak to that in an exact way so I better just not.”

Paul Ryan (after joining the campaign)

A couple of reporters have tried asking Ryan himself on the campaign trail, with only slightly better luck. The most complete answer we could find was given to Chris Moody, a reporter with Yahoo! Here is what Ryan had to say:

First of all, those are in the baseline, he put those cuts in. Second of all, we voted to repeal Obamacare repeatedly, including those cuts. I voted that way before the budget, I voted that way after the budget. So when you repeal all of Obamacare what you end up doing is that repeals that as well. In our budget we’ve restored a lot of that. It gets a little wonky but it was already in the baseline. We would never have done it in the first place. We voted to repeal the whole bill. I just don’t think the president’s going to be able to get out of the fact that he took $716 billion from Medicare to pay for Obamacare.”

If you translate his answer into regular English, you find that Ryan is basically making three points:

The baseline is just the yardstick the nonpartisan Congressional Budget Office uses to measure whether a given bill will add to, or subtract from, the deficit. They add all the money we’re expected to bring in from taxes, subtract all the money we’re expected to spend under current law, and voila— that’s your baseline. Both Ryan’s budget and the separate bills to repeal Obamacare are measured against this same baseline– there’s no reason Ryan would be able to repeal the Medicare cuts in one but not the other.

Paul Ryan (before joining the campaign)

Before he was picked by Romney, Ryan gave a slightly different answer, implying that the problem wasn’t the $716 billion in Medicare cuts– it’s how Obama used that savings:

The part about extending Medicare’s solvency is a little misleading– as we’ve explained before, Medicare’s “solvency” is a made up accounting issue (the real problem is that rising Medicare costs will blow up the deficit).

However, the criticism of Obama using the Medicare savings to pay for things Republicans don’t like is clearly different from the claim they’re currently making– that the $716 billion “gutted” Medicare.

And so we end up back where we started: If Republicans believe the cuts are so devastating, why did Ryan keep them?

Next post: Everyone agrees Medicaid doesn’t pay doctors enough. What to do about it is another story

Previous post: The 7 misleading claims Mitt Romney has made about Medicare